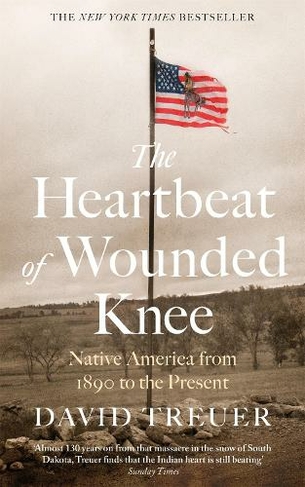 The Heartbeat of Wounded Knee

By David Treuer (Author)
Paperback
https://www.whsmith.co.uk/products/the-heartbeat-of-wounded-knee/david-treuer/paperback/9781472154941-12-000.html £11.99 rrp £14.99 Save £3.00 (20%)
GBP
Availability
In Stock
Free Delivery Available When You Spend £25 Or More
Details
Spend £25 On Eligible Products To Recieve Free Standard Delivery To You Home Or Free Next Working Day Click And Collect To Store
Share

FINALIST FOR THE 2019 NATIONAL BOOK AWARD CHOSEN BY BARACK OBAMA AS ONE OF HIS FAVOURITE BOOKS OF 2019 LONGLISTED FOR THE 2020 ANDREW CARNEGIE MEDAL FOR EXCELLENCE A NEW YORK TIMES BESTSELLER 'An informed, moving and kaleidoscopic portrait... Treuer's powerful book suggests the need for soul-searching about the meanings of American history and the stories we tell ourselves about this nation's past' New York Times Book Review, front page The received idea of Native American history has been that American Indian history essentially ended with the 1890 massacre at Wounded Knee. Not only did one hundred fifty Sioux die at the hands of the U.S. Cavalry, the sense was, but Native civilization did as well. Growing up Ojibwe on a reservation in Minnesota, training as an anthropologist, and researching Native life past and present for his nonfiction and novels, David Treuer has uncovered a different narrative. Because they did not disappear - and not despite but rather because of their intense struggles to preserve their language, their traditions, their families, and their very existence- the story of American Indians since the end of the nineteenth century to the present is one of unprecedented resourcefulness and reinvention. In The Heartbeat of Wounded Knee, Treuer melds history with reportage and memoir. Tracing the tribes' distinctive cultures from first contact, he explores how the depredations of each era spawned new modes of survival. The devastating seizures of land gave rise to increasingly sophisticated legal and political maneuvering that put the lie to the myth that Indians don't know or care about property. The forced assimilation of their children at government-run boarding schools incubated a unifying Native identity. Conscription in the US military and the pull of urban life brought Indians into the mainstream and modern times, even as it steered the emerging shape of self-rule and spawned a new generation of resistance. The Heartbeat of Wounded Knee is the essential, intimate story of a resilient people in a transformative era.

David Treuer is Ojibwe from the Leech Lake Reservation in northern Minnesota. The author of four previous novels, most recently Prudence, and two books of nonfiction, he has also written for The New York Times, Los Angeles Times, Esquire, Slate, and The Washington Post, among others. He has a Ph.D. in anthropology and teaches literature and creative writing at the University of Southern California.