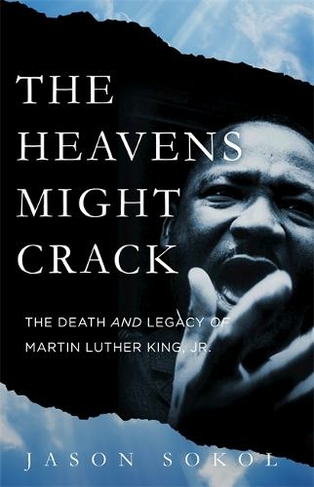 The Heavens Might Crack: The Death and Legacy of Martin Luther King Jr.

By Jason Sokol (Author)
Hardback
https://www.whsmith.co.uk/products/the-heavens-might-crack-the-death-and-legacy-of-martin-luther-king-jr/jason-sokol/hardback/9780465055913-12-000.html £20.00 rrp £25.00 Save £5.00 (20%)
GBP
Availability
In Stock
Free Delivery Available When You Spend £25 Or More
Details
Spend £25 On Products To Receive Free Standard Delivery To Your Home Or Free Next Working Day Click And Collect To Store
Share

Martin Luther King Jr today is an uncontroversial figure, and we tend to see him as a saint whose legacy is entirely uncomplicated. But in 1968, King was a polarizing figure, and his assassination was met with uncomfortably mixed reactions. At the time of his death, King was scorned by many white Americans, worshiped by a segment of African Americans and liberal whites, deemed irrelevant by the younger generation of African Americans, and beloved overseas. He was a hero to many. But to some, he was part of an old guard that was no longer relevant, and to others he was nothing more than a troublemaker and a threat to the Southern way of life. In The Heavens Might Crack, historian Jason Sokol traces the diverse range of reactions to King's death, exploring how Americans - as well as others across the globe--experienced King's assassination, in the days, weeks, and months afterward. He looks at everything from rioting in inner cities to turbulence in Germany, from celebrations in many parts of the South to the growing gun control movement. Across all these responses, we see one clear trend: with King gone and the cities exploding, it felt like a gear in the machinery of the universe had shifted. Just a few years prior, with the enactment of landmark civil rights laws, interracial harmony appeared conceivable; peaceful progress toward civil rights even seemed probable. In an instant, such optimism had vanished. For many, King's death extinguished that final flicker of hope for a multiracial America. With that hope gone, King's assassination would have an indelible impact on American sentiments about race, and the civil rights landscape. The Heavens Might Crack is a deeply empathetic portrait of country grappling with the death of a complicated man. By highlighting how this moment was perceived across the nation, Sokol reveals the enduring consequences King's assassination had for the shape of his own legacy, the course of the Civil Rights Movement, and race relations in America. 17 Halftones, black & white

Jason Sokol is the Arthur K. Withcomb Associate Professor of History at the University of New Hampshire since 2016, and was previously a Fellow at Harvard College's Department of African and African American Studies. He holds a PhD in U.S. history from the University of California, Berkeley, and was previously a Visiting Assistant Professor of History and Mellon Postdoctoral Fellow at Cornell University and a Mellow Fellow at the University of Pennsylvania. Sokol's first book, There Goes My Everything: White Southerners in the Age of Civil Rights, received rave reviews and was named one of the best books of 2006 by the Washington Post Book World. He was also named one of America's "Top Young Historians" by the History News Network, and his writing has appeared in the Nation, the New York Times, Slate, and the Boston Globe. Sokol lives in Newburyport, Massachusetts.