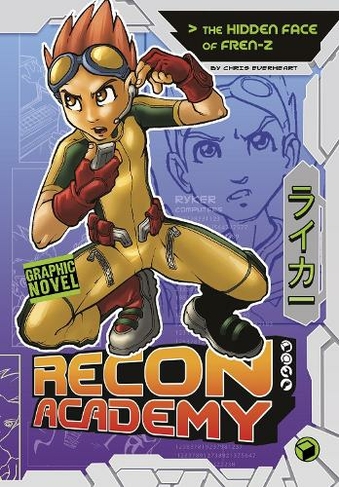 The Hidden Face of Fren-Z

When someone hacks the Federal Reserve Bank computer, the Recon Academy needs to act fast. If they don't stop the techno thief soon, the world's economy could crumble. But not even Ryker, the group's computer whiz, can do it alone. He'll need help from the entire team to bust this e-bandit and discover the hidden face of Fren-Z.

Chris Everheart always dreamed of interesting places, fascinating people, and exciting adventures. He is still a dreamer. He enjoys writing thrilling stories about young heroes who live in a world that doesn't always understand them. Chris lives in Minneapolis, Minnesota with his family. He plans to travel to every continent on the globe, see interesting places, meet fascinating people, and have exciting adventures. As a lifelong comics fan, Sean O'Reilly dreamed of becoming a comic book creator. In 2004, he realized that dream by creating Arcana Studio. In once short year, O'Reilly took his studio from a one-person operation in his basement to an award-winning comic book publisher with more than 150 graphic novels produced for Harper Collins, Simon & Schuster, Random House, Scholastic, and others. Within a year, the company won many awards including the Shuster Award for Outstanding Publisher and the Moonbeam Award for top children's graphic novel. O'Reilly also won the Top 40 Under 40 award from the city of Vancouver and authored "The Clockwork Girl" for Top Graphic Novel at Book Expo America in 2009. Currently, O'Reilly is one of the most prolific independent comic book writers in Canada. While showing no signs of slowing down in comics, he now writes screenplays and adapts his creations for the big screen.