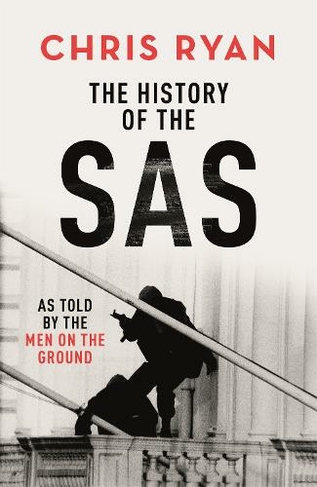 The History of the SAS

By Chris Ryan (Author)
Hardback
https://www.whsmith.co.uk/products/the-history-of-the-sas/chris-ryan/hardback/9781529324648-12-000.html £16.00 rrp £20.00 Save £4.00 (20%)
GBP
Availability
In Stock
Free Delivery Available When You Spend £25 Or More
Details
Spend £25 on eligible products to receive free standard delivery to home or free next working day click and collect to store
Share

'Drawing on the stories of the soldiers who were there, this dramatic history of the SAS is full of bravado. Forged to fight guerrillas in the sweltering jungles of Malaya... Ryan writes with the authority of a man familiar with every nuance of the regiment's tactics, training, weapons and equipment.' - Sunday Times Culture Tasked with storming mountain strongholds in the desert. Trained to hunt down the world's most wanted terrorists. This is the extraordinary story of 22 SAS. The history of the modern SAS is one of the great successes of post-war Britain. Since it was revived in 1950 to combat Communist insurgents, the Regiment has gone from strength to strength, fighting covert wars in Oman, Borneo, Northern Ireland, the Falklands, the Persian Gulf and beyond. In the process, it has become one of the most indispensable, and at times controversial, units in the British army Today, the SAS is regarded as the world's leading Special Forces unit, renowned for its demanding Selection course and its relentless ability to adapt to the changing nature of warfare. More than anything else, however, it is the determination and ingenuity of the SAS soldiers that has made the Regiment what it is today. Drawing on his extensive network of contacts and his own experiences, Chris Ryan tells the story of the men on the ground. From the earliest patrols in the Malayan jungle, through to the storming of the Iranian Embassy, the daring raids behind enemy lines in the Gulf War, and up-to-minute missions to capture or kill notorious terrorists - this is the gripping, no-holds-barred account of Regiment operations. Above all, it is a story of elite soldiers fighting, and triumphing, against seemingly impossible odds.

Former SAS corporal and the only man to escape death or capture during the Bravo Two Zero operation in the 1991 Gulf War, Chris Ryan turned to writing thrillers to tell the stories the Official Secrets Act stops him putting in his non-fiction. His novels have gone on to inspire the Sky One series Strike Back. Born near Newcastle in 1961, Chris Ryan joined the SAS in 1984. During his ten years there he was involved in overt and covert operations and was also sniper team commander of the anti-terrorist team. During the Gulf War, Chris Ryan was the only member of an eight-man unit to escape from Iraq, where three colleagues were killed and four captured. It was the longest escape and evasion in the history of the SAS. For this he was awarded the Military Medal. He wrote about his experiences in the bestseller The One That Got Away, which was adapted for screen, and since then has written three other works of non-fiction, over twenty bestselling novels and a series of childrens' books.