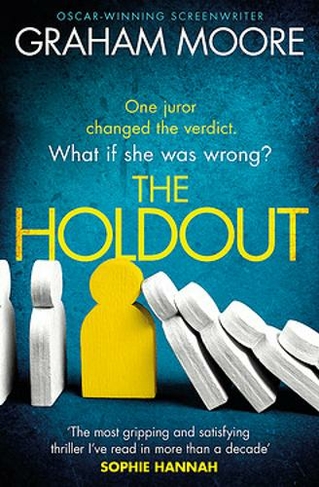 The Holdout: One jury member changed the verdict. What if she was wrong? 'The Times Best Books of 2020'

'The most gripping and satisfying thriller I've read in more than a decade' Sophie Hannah 'One of the best legal thrillers ... as elegant and gripping as Scott Turow's Presumed Innocent' Daily Mail 'Quite the tour de force! Twelve Angry Men meets Chinatown and creates something of its own' Sarah Pinborough 'This is a tense, emotionally charged, scary-good, stand-out read' Caroline Kepnes ********** MAJOR TV SERIES COMING SOON - FROM THE PEOPLE WHO BROUGHT YOU NETFLIX'S UNBELIEVABLE... One juror changed the verdict. What if she was wrong? 'Ten years ago we made a decision together...' Fifteen-year-old Jessica Silver, heiress to a billion-dollar fortune, vanishes on her way home from school. Her teacher, Bobby Nock, is the prime suspect. It's an open and shut case for the prosecution, and a quick conviction seems all but guaranteed. Until Maya Seale, a young woman on the jury, persuades the rest of the jurors to vote not guilty: a controversial decision that will change all of their lives forever. Ten years later, one of the jurors is found dead, and Maya is the prime suspect. The real killer could be any of the other ten jurors. Is Maya being forced to pay the price for her decision all those years ago? ********** 'Plunge a syringe filled with adrenaline into the heart of Twelve Angry Men and you've got The Holdout: the first legal thriller in thirty years - ever since Presumed Innocent and A Time to Kill electrified readers the world over - to rank alongside those two modern classics.' AJ Finn 'A page-turning legal thriller with a twisty and absolutely riveting plot ... plus a strong and compelling female heroine. You won't be able to put this one down!' Lisa Scottoline 'Clever, well-written and twistier than a can of silly-string. You absolutely need to read The Holdout!' Emma Kavanagh 'Amazing thriller, deserves to be one of the biggest books of 2020' Michelle Davies 'Terrific, twisty and well-structured thriller' Adele Geras

Graham Moore is a New York Times bestselling novelist and Academy Award-winning screenwriter. His screenplay for THE IMITATION GAME won the Academy Award and WGA Award for Best Adapted Screenplay in 2015 and was nominated for a BAFTA and a Golden Globe. The film, directed by Morten Tyldum and starring Benedict Cumberbatch and Keira Knightley, received 8 Academy Award nominations, including Best Picture.