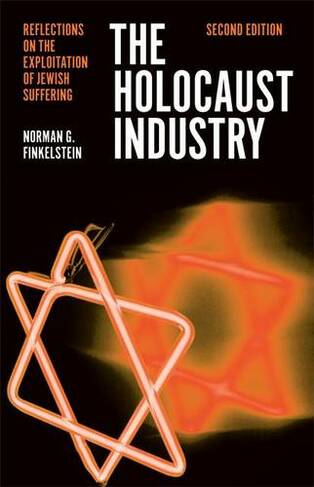 The Holocaust Industry: Reflections on the Exploitation of Jewish Suffering

By Norman Finkelstein (Author)
Paperback
£9.99
GBP
Availability
In Stock
Free Delivery Available When You Spend £15 Or More
Details
Spend £15 On Products To Receive Free Standard Delivery To Your Home Or Free Next Day Click and Collect To Stores
Share

"In an iconoclastic and controversial study, Norman G. Finkelstein moves from an interrogation of the place the Holocaust has come to occupy in American culture to a disturbing examination of recent Holocaust compensation agreements. It was not until the Arab-Israeli War of 1967, when Israel's evident strength brought it into line with US foreign policy, that memory of the Holocaust began to acquire the exceptional prominence it enjoys today. Leaders of America's Jewish community were delighted that Israel was now deemed a major strategic asset and, Finkelstein contends, exploited the Holocaust to enhance this newfound status. Their subsequent interpretations of the tragedy are often at variance with actual historical events and are employed to deflect any criticism of Israel and its supporters. Recalling Holocaust fraudsters such as Jerzy Kosinski and Binjamin Wilkomirski, as well as the demagogic constructions of writers like Daniel Goldhagen, Finkelstein contends that the main danger posed to the memory of Nazism's victims comes not from the distortions of Holocaust deniers but from prominent, self-proclaimed guardians of Holocaust memory. Drawing on a wealth of untapped sources, he exposes the double shakedown of European countries as well as legitimate Jewish claimants, and concludes that the Holocaust industry has become an outright extortion racket. Thoroughly researched and closely argued, The Holocaust Industry is all the more disturbing and powerful because the issues it deals with are so rarely discussed. In a devastating postscript to this best-selling book, Norman G. Finkelstein documents the Holocaust industry's scandalous cover-up of the blackmail of Swiss banks, and in a new appendix demolishes an influential apologia for the Holocaust industry."

Norman G. Finkelstein taught political theory and the Israel-Palestine conflict for many years. He is the author of eight books which have been translated into more than 40 foreign editions, including: What Gandhi Says: About Nonviolence, Resistance and Courage, This Time We Went Too Far: Truth and Consequences of the Gaza Invasion, Goldstone Recants: Richard Goldstone Renews Israel's License to Kill, Beyond Chutzpah: On the Misuse of Anti-Semitism and the Abuse of History, mage and Reality of the Israel-Palestine Conflict.