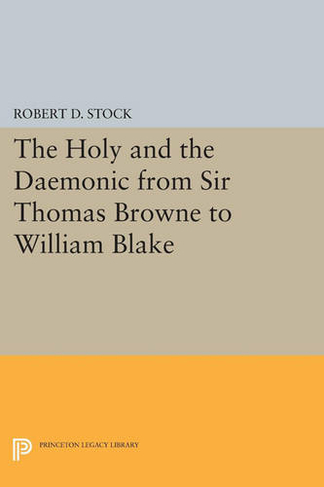 The Holy and the Daemonic from Sir Thomas Browne to William Blake: (Princeton Legacy Library)

Focusing particularly on literary texts, but including biographical and intellectual background, this study examines numinous feeling as it is recorded by a number of seventeenth and eighteenth-century writers: Browne, Drydcn, Pascal; Pope and Swift; Hume and Johnson; eight other poets, including Watts, Smart, Cowper, and Blake; and four novelists, including Richardson, Radcliffe, and Monk" Lewis. Professor Stock demonstrates that the Enlightenment was far more complicated than can be grasped by an exclusive focus on its rationalism and skepticism. Originally published in 1982. The Princeton Legacy Library uses the latest print-on-demand technology to again make available previously out-of-print books from the distinguished backlist of Princeton University Press. These editions preserve the original texts of these important books while presenting them in durable paperback and hardcover editions. The goal of the Princeton Legacy Library is to vastly increase access to the rich scholarly heritage found in the thousands of books published by Princeton University Press since its founding in 1905.