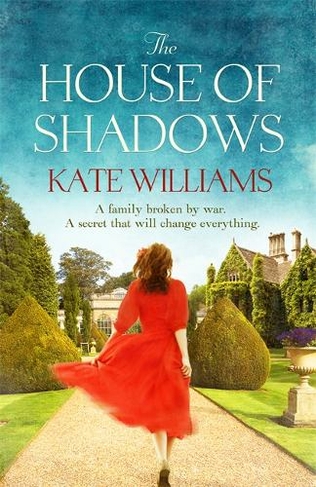 The House of Shadows

By Kate Williams (Author)
Hardback
https://www.whsmith.co.uk/products/the-house-of-shadows/kate-williams/hardback/9781409139959-12-000.html £15.19 rrp £18.99 Save £3.80 (20%)
GBP
Availability
In Stock
Free Delivery Available When You Spend £25 Or More
Details
Spend £25 on eligible products to receive free standard delivery to home or free next working day click and collect to store
Share

'Downton fans will love the elegance, intrigue and drama of The House of Shadows' - Yours The final compelling historical saga concluding a trilogy that began with Storms of War and The Edge of the Fall, from popular TV historian and critically-acclaimed author Kate Williams. Celia De Witt is half-German, half-English and heir to her family's vast fortune. But it is 1929, the world is changing and her life seems less secure than ever. A shocking revelation from her father sends her far from England and the life she knew and headlong into New York, a city brimming with money and promise. Celia sets about saving the family firm by creating an innovative new range of convenience foods for the new generation of independent young women. But she also has other plans. The son she thought was dead is in America and the man she once thought she loved is nearby - but if she opens the Pandora's Box of the past, she may find other secrets will escape... As the shadow of war once again threatens to fall across Europe, Celia is determined to save those she loves, even if it comes at the highest price... 'A beautifully conjured family saga. Fans of Downton Abbey will love it' - Alison Weir 'This terrific saga comes with a fascinating twist ... Williams has a gift for showing how great movements in history affect the lives of people caught up in them' The Times 'Brilliant - a passionate and poignant story of a glittering family on the precipice of a vanished world ... a must-read' Lisa Hilton

Kate Williams is an author, social historian and broadcaster. She has a DPhil from Oxford and is the author of the novel The Pleasures of Men and four historical biographies of Emma Hamilton, Queen Victoria, Elizabeth II and Empress Josephine - which is being made into a major TV series.Kate is CNN's historian and royal expert, covers royal and national events on the BBC and other channels and regularly appears on other TV programmes, including BBC Breakfast, Restoration Home and The Great British Bake Off, discussing social and royal history, general politics and culture. She is the resident historian on Frank Skinner's BBC Radio 4 panel show The Rest is History, and writes features, reviews and comment pieces for various newspapers and magazines, including the Sunday Times, Daily Telegraph, Independent and Observer.Find out more at www.kate-williams.com and follow her on Twitter @KateWilliamsme