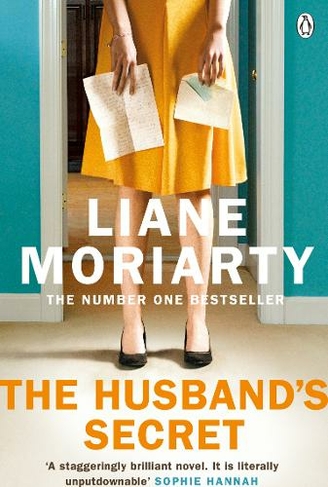 By Liane Moriarty (Author)
Paperback
https://www.whsmith.co.uk/products/the-husbands-secret-from-the-bestselling-author-of-big-little-lies-now-an-award-winning-tv-series/liane-moriarty/paperback/9781405911665-12-000.html £7.37 rrp £8.99 Save £1.62 (18%)
GBP
Availability
In Stock
Free Delivery Available When You Spend £25 Or More
Details
Spend £25 on eligible products to receive free standard delivery to home or free next working day click and collect to store
Share

What would you do? Discover the enthralling story of secrets, family, and the danger of the truth from the bestselling author HBO sensation BIG LITTLE LIES 'Another MASTERCLASS from the author of Big Little Lies' GRAZIA _______________ Cecilia discovers an old envelope in the attic. Written in her husband John-Paul's hand, it says: 'to be opened only in the event of my death'. Curious, she opens it - and time stops. John-Paul's letter confesses to a terrible mistake which, if revealed, would wreck their family as well as the lives of others . . . Cecilia wants to do the right thing, but right for who? If she protects her family by staying silent, the truth will worm through her heart. But if she reveals her husband's secret, she will hurt those she loves most . . . 'A staggeringly brilliant novel. It is literally unputdownable' SOPHIE HANNAH 'A tense, page-turning story which gradually draws everyone together in a devastating climax' MAIL ON SUNDAY 'If you like Jodi Picoult, you'll love this. Addictive' ESSENTIALS PRAISE FOR LIANE MORIARTY 'Moriarty writes vividly, wittily and wickedly' Sunday Express 'Mistress of the razor-sharp observation' Kate Morton 'An extraordinary talent' Nicole Kidman 'Keeps you guessing to the very end - perfect summer read' Reese Witherspoon 'Gripping, acutely observed, thought-provoking and funny' Marie Claire

Liane Moriarty is the bestselling author of eight novels: Three Wishes, The Last Anniversary, What Alice Forgot, The Hypnotist's Love Story, The Husband's Secret, Big Little Lies, Truly Madly Guilty and Nine Perfect Strangers. The Husband's Secret is a worldwide bestseller which has sold more than three million copies and been translated into over forty languages. Big Little Lies is now an Emmy and Golden Globe-winning HBO series, produced by and starring Nicole Kidman and Reese Witherspoon. Liane lives in Sydney with her husband, son and daughter.