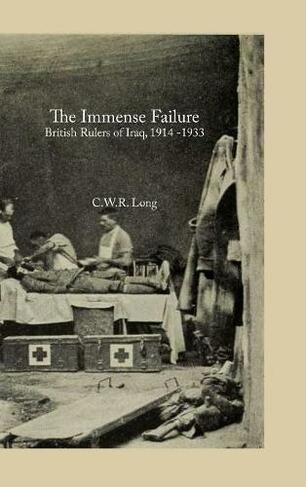 Ottoman Turkey's First World War alliance with Germany provoked the first British invasion of Mesopotamia (Iraq), from India, in November 1914. A year later, General Townshend had to withdraw from Ctesiphon to Kut al-`Amarah, there to be besieged. Premature attempts were vainly made with great bloodshed to relieve him (including one involving bribery by T.E.Lawrence) until, after the longest ever imperial siege, more than a third of the garrison became casualties during a forced march to an exile of hard labour in Turkey. After Baghdad was finally taken in March 1917, Chief Political Officer Arnold Wilson, wrangling with Gertrude Bell, settled the country's boundaries and - following a costly uprising epitomising `the immense failure' -- proposed Faysal, expelled from Syria by France, as King. Sir Percy Cox and his successor High Commissioners, constructing institutions, gained for the UK control of the communication sinews of the country via one-sided treaties. Striving with Faysal and inexperienced politicians, they finally secured its `independence' in October 1932. The following year, Faysal died after a massacre of Assyrians by the army of Iraq, whose armed forces were too weak to resist in May 1941 when Britain invaded again to overthrow a pro-German government before being finally expelled from the country in 1958. 20 black and white

Richard Long is a linguist, historian and active speaker and writer on Middle Eastern subjects. He graduated from Cambridge with a First in Arabic and Persian and spent a year as a Fellow of the Institute of Islamic Studies of McGill University, Montreal. He then embarked on a career in diplomatic and cultural relations during which he lived in six Arab countries and Turkey, with three years in Baghdad as the highlight. (Salman Rushdie's The Satanic Verses caused the cancellation of a posting to Tehran.) Latterly, he spent a decade running the International Office of the University of Newcastle upon Tyne and teaching Middle East History there and at Durham University. He has done consultancy work for the BBC and Longman and wrote the text of the booklet for the exhibition commemorating the first 25 years of the independent United Arab Emirates. The author (either as Richard Long or C.W.R. Long) of Tawfiq al-Hakim, Playwright of Egypt (1979), Bygone Heat. Travels of an Idealist in the Middle East (2004) and British Pro-consuls in Egypt, 1914-1929. The Challenge of Nationalism (2005), to which this book is a sequel.