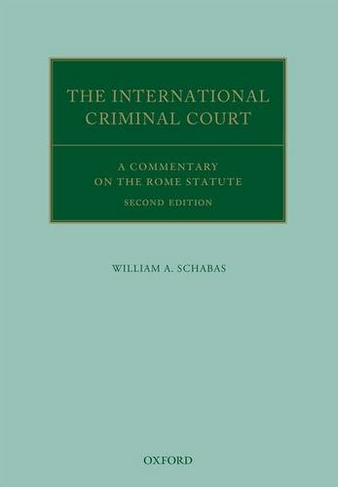 Also available on eBook for £212.51. Click here to purchase from Rakuten Kobo

Established as one of the main sources for the study of the Rome Statute of the International Criminal Court, this volume provides an article-by-article analysis of the Statute; the detailed analysis draws upon relevant case law from the Court itself, as well as from other international and national criminal tribunals, academic commentary, and related instruments such as the Elements of Crimes, the Rules of Procedure and Evidence, and the Relationship Agreement with the United Nations. Each of the 128 articles is accompanied by an overview of the drafting history as well as a bibliography of academic literature relevant to the provision. Written by a single author, the Commentary avoids duplication and inconsistency, providing a comprehensive presentation to assist those who must understand, interpret, and apply the complex provisions of the Rome Statute.This volume has been well-received in the academic community and has become a trusted reference for those who work at the Court, even judges. The fully updated second edition of The International Criminal Court incorporates new developments in the law, including discussions of recent judicial activity and the amendments to the Rome Statute adopted at the Kampala conference.