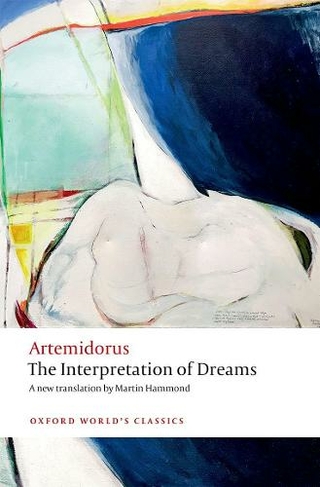 'Dreams are products of the mind, and do not come from any external source' Artemidorus' The Interpretation of Dreams (Oneirocritica) is the richest and most vivid pre-Freudian account of dream interpretation, and the only dream-book to have survived complete from Graeco-Roman times. Written in Greek around AD 200, when dreams were believed by many to offer insight into future events, the work is a compendium of interpretations of dreams on a wide range of subjects relating to the natural, human, and divine worlds. It includes the meanings of dreams about the body, sex, eating and drinking, dress, the weather, animals, the gods, and much else. Artemidorus' technique of dream interpretation stresses the need to know the background of the dreamer, such as occupation, health, status, habits, and age, and the work is a fascinating social history, revealing much about ancient life, culture, and beliefs, and attitudes to the dominant power of Imperial Rome. Martin Hammond's fine translation is accompanied by a lucid introduction and explanatory notes by Peter Thonemann, which assist the reader in understanding this important work, which was an influence on both Sigmund Freud and Michel Foucault. 3 maps

Martin Hammond was born in 1944 and educated at Winchester College and Balliol College, Oxford. He has taught at St Paul's School, Harrow School, and Eton College, where he was Head of Classics from 1974 to 1980, and Master in College from 1980 to 1984. He was Headmaster of the City of London School from 1984 to 1990, and of Tonbridge School from 1990 to his retirement in 2005. He has translated the Iliad (Penguin, 1987), the Odyssey(Duckworth, 2000; Bloomsbury, 2014), the Meditations of Marcus Aurelius (Penguin, 2006), and for Oxford World's Classics Thucydides' Peloponnesian War (2009), Arrian's Anabasis and Indica (2013), Josephus: The Jewish War (forthcoming), and Procopius: The Secret History (in progress). Peter Thonemann teaches Greek and Roman history at Wadham College, Oxford. As an undergraduate student at Lady Margaret Hall (Oxford), he was taught by Simon Price, author of the most important modern study of Artemidorus ('The future of dreams: from Freud to Artemidorus', Past & Present 113 (1986) 3-37). He is the co-author (with Simon Price) of the first volume of the Penguin History of Europe, The Birth of Classical Europe: A History from Troy to Augustine (Allen Lane, 2010;translated into Dutch, Italian, and Chinese); his most recent book is a short introduction to the Hellenistic World for Oxford University Press, The Hellenistic Age (Oxford 2016). He writes regularly on all aspects of the ancient world for the Times Literary Supplement and the Wall Street Journal.