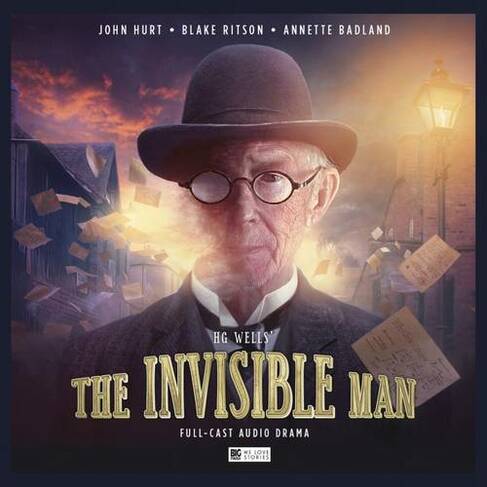 In the midst of a snowstorm, a stranger arrives in an English country inn, seeking solitude. Soon, inexplicable goings-on at the Coach and Horses bring fear to the village. Two very different men - the scholarly Dr Kemp and gentleman-of-the-road Thomas Marvel - are drawn into terrible events beyond their understanding. A man named Griffin has defied the laws of nature, and is about to embark on a reign of terror. For he is...The Invisible Man. The Invisible Man is the first of six full-cast adaptations in 2017 of the works of British Sci-Fi writer extraordinaire Herbert George Wells. Star John Hurt is a legend of British TV and film, from his iconic roles in Alien, 1984, The Elephant Man, through to his appearance as The War Doctor in Doctor Who's 50th anniversary story. His War Doctor character has been the subject of four hugely popular Doctor Who audio releases from Big Finish. Guest star Annette Badland is familiar to many TV viewers, in a varied career which has taken in everything from EastEnders to Doctor Who.C AST: John Hurt (Griffin), Blake Ritson (Kemp), Peter Noble (Thomas Marvel), Dan Starkey (Teddy Henfrey), Annette Badland (Mrs Hall), David Rintoul (Reverend Bunting/Dr Cuss/The American), Richard Dixon (Colonel Adye/Mariner/Shopkeeper), Alex Clatworthy (Agatha/Millie/Marie), Alexander Forsyth (Sergeant Perkins/ Constable Jaffers/Barman).