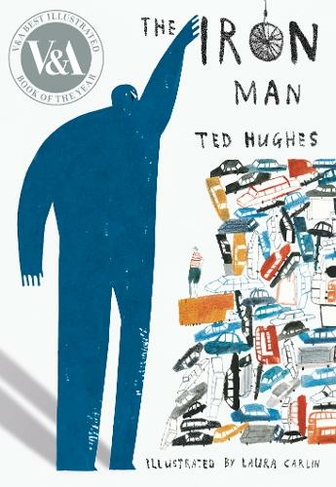 "A classic is something utterly strange and original, and yet as deeply familiar and necessary as your own hands. The Iron Man is like no other story in the world and, fifty years after its first publication, we need it as much as ever." -- Philip Pullman Part modern fairy tale, part science-fiction myth, The Iron Man describes the unexpected arrival in England of a mysterious giant "metal man" who wreaks havoc on the countryside by attacking the neighbouring farms and eating all their machinery. A young boy called Hogarth befriends him, and Hogarth and the extraordinary being end up defending and saving the earth when it is attacked by a fearsome "space-bat-angel-dragon" from outer space. Ted Hughes' classic tale, with its message of peace and hope, is known and loved all over the UK and is an exciting collaboration between Walker Books and Faber and Faber. This beautiful, small-format paperback celebrates 50 wonderful years of Ted Hughes' classic tale. WINNER OF THE V&A BEST ILLUSTRATED BOOK OF THE YEAR "A stunning production ... spectacular" The Sunday Times Colour illustration on every page

Ted Hughes was born in Yorkshire in 1930. His first book, The Hawk in the Rain, was published by Faber and Faber in 1957, and was followed by many volumes of poetry and prose for both children and adults, including How the Whale Became, Under the North Star, Tales from Ovid and Birthday Letters. He was Poet Laureate from 1984 and was appointed to the Order of Merit in 1998, the year in which he died.Laura Carlin is a graduate of the Royal College of Art and the winner of several awards, including the Quentin Blake Award, the 2004 National Magazine Award and the V&A Book Illustration Award. Her work has featured in Vogue, the Guardian and The New York Times and her other books include The Silver Donkey by Sonya Hartnett and Michael Morpurgo's The Kites are Flying! Laura was awarded an honourable mention in the Bologna Ragazzi Award fiction category for The Iron Man. She lives in London.