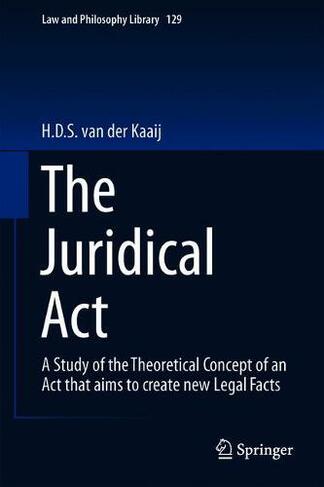 The Juridical Act A Study of the Theoretical Concept of an Act that aims to create new Legal Facts 129 1st ed. 2019

This book puts forward a new theoretical concept of the juridical act, this concept is not described from the perspective of a specific national legal system, but instead represents the commonalities and ideas that stem from the Western legal tradition. Since the concept is system-independent, it does not rely on national or state laws. The book begins by detailing those characteristics that distinguish juridical acts from the general group of acts. It offers clear distinctions between the different aspects of juridical acts, such as the power and the competence needed in order to perform the act, the fact that juridical acts are constitutive speech acts, and the rules that connect the act with its consequences. In the process, the book dispels much of the haziness currently surrounding juridical acts. Developed with a mix of theory and practice, this new concept is better equipped to deal with modern trends and practices. Further, since the author has freed the idea of the juridical act from the bonds of history and geography, it is also more suited to facilitating a better understanding of and explaining changes in the legal landscape, such as the rise of computer technology. Accordingly, it offers scholars and practitioners alike a valuable new tool for explaining and theorizing about the law. 9 Illustrations, color; 25 Illustrations, black and white; IX, 184 p. 34 illus., 9 illus. in color.

Hester van der Kaaij holds a bachelor degree in law and a master degree in private law from the University of Maastricht (2011). In May 2016 she obtained her PhD in the field of legal theory and legal philosophy. Her interests lie with the study of the basic concepts of law, juridical acts, philosophy of language and institutional theories of law. In August 2016 she started her training to become a lawyer at Themis Advocaten in Maastricht.