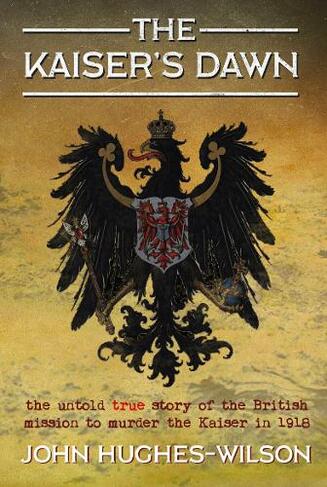 The Kaiser's Dawn: The Untold Story of Britain's Secret Mission to Murder the Kaiser in 1918

In mid summer 1918 the First World War was still finely balanced. A top secret mission, which has remained classified information for a century, was set in motion to kill Kaiser Wilhelm II. It was felt that by killing their head of state and commander in chief it would serve as a mortal blow to the German forces and they would collapse very quickly after the assassination. In 2002 one of the participants on a battlefield tour sent a disc to Col. John Hughes- Wilson. On it was an historical treasure trove containing a Royal Flying Corps log book and photographs of service with 25 Squadron. Included among the effects of Lt A.R.Watts MC, of the newly formed Royal Air Force, was the breath-taking claim that he had taken part in a secret British mission to kill the Kaiser. This extraordinary secret was confirmed by further research at the RAF museum and the RAF Historical Branch. This startling but never before revealed story was true. On 2nd June 1918, at the height of the final German attack of WW1, the British RAF tried to assassinate the Kaiser when he was visiting a chateau near the front. The facts are borne out in never-before-published notebooks, maps and pilots' flying records, kept secret for a hundred years. Copies of these records are in the author's possession and are backed up by details tucked away in 25 Squadron's records. But the implications of this secret attack raise many new - and explosive - questions. Exactly who ordered an attack to kill the Kaiser? Was it sanctioned by the C-in-C, Sir Douglas Haig? By the War Office? Unlikely. Was the King informed of the attempt to kill his royal cousin? Was Lloyd George, the Prime Minister asked? We do not know; but someone in London must have sanctioned the attack. The Official History makes no mention of any attack, and public records say nothing. Even the RAF Museum has no official record: but the attack really did take place, of that there is no doubt. Other documents and various 25 Squadron log books prove it. So someone did give an order to kill the Kaiser. But who? John Hughes-Wilson has woven an exciting and well-paced historical novel to mark this centennial event from the research on discovering this mission. The story, based on true events, looks at this long hidden secret and puts it into the context of the time. It explores areas rarely examined: secret service operations in 1914-18; dirty, undercover intelligence work; the very real political intrigues between Whitehall and the generals and the heroics of the aircrew of the day, whose life expectancy at one point in 1917 was only eleven days in action. 10 Illustrations, black and white

John Hughes Wilson was a serving officer in the British Army for over thirty years,serving in the Intelligence Corps and as a Special Forces operations officer, endinghis career as a senior intelligence officer with SHAPE and NATO in Brussels. Sinceretirement he has written seven books of non-fiction and eight novels.