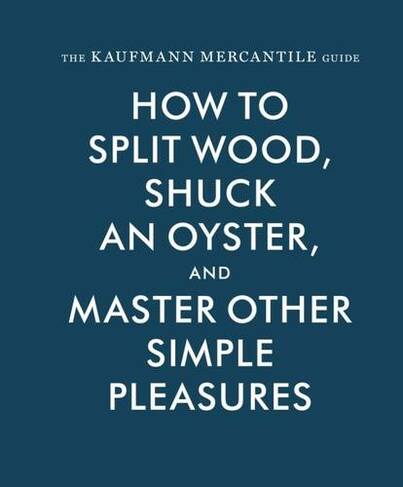 The Kaufmann Mercantile Guide: How to Split Wood, Shuck an Oyster, and Master Other Simple Pleasures

Also available on eBook for £14.75. Click here to purchase from Rakuten Kobo

A trusty companion for the slow and thoughtful home and the inner utilitarian in us all, The Kaufmann Mercantile Guide: How to Split Wood, Shuck an Oyster and Master Other Simple Pleasures allows you to experience the singular satisfaction of doing it yourself. Each project, whether caring for cast iron or planting with the seasons, is supplemented with expert tips to inspire and empower. Organised into five sections-Kitchen, Outdoors, Home, Gardening, and Grooming-the comprehensive guide features detailed instructions and original artwork for tasks both simple, such as brewing the perfect cup of coffee and exploratory, such as fording a stream and reading the sky. Accompanying the how-tos are tried-and-true products selected from the Kaufmann Mercantile store that not only help one get the job done but are also a joy to use. As editors Alexandra Redgrave and Jessica Hundley describe in the introduction, "This book began out of a curiosity for how we grow, build, and craft the world around us. We discovered that there's an art to a simple task done well - it calls for consideration and creativity, the rolling up of sleeves, and the digging into of details. It means getting messy, and, perhaps, messing up. In our world of modern convenience, doing it yourself is immensely rewarding. And so, consider the book in your hands as a starting point. We hope you, like us, find inspiration in these pages to experiment, to investigate, to create, and to enlighten your everyday."

Sebastian Kaufmann is CEO and founder of the New York-based online retailer, Kaufmann Mercantile. Originally conceived as a blog, Sebastian's strategic vision has led the company's growth to a full-scale e-commerce brand, offering the finest made products from over 300 of the world's best manufacturers in more than 20 countries. The company's dedication to sourcing and selling ethically-made and hand-picked items carries across in its careful consideration and selection criteria, as well as its commitment to telling the stories of those who made them. Prior to founding Kaufmann Mercantile, Sebastian co-founded music video and commercial film production company Draw Pictures, where he helmed the company as CEO. In addition, he founded feature film development company Six Neighborhood Films in 2003.