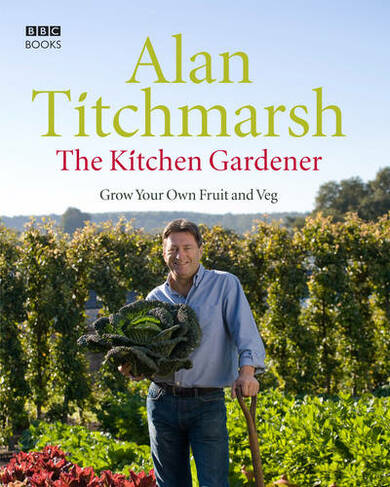 The Kitchen Gardener: Grow Your Own Fruit and Veg

Allotments with ten-year waiting lists; fruit and veg seeds outselling those of flowers - Britain is growing a passion for home produce and the time is right for the nation's favourite gardener to provide the definitive book on the subject. Alan's comprehensive guide will tell you everything you could possibly want or need to know about fruit and veg and how to grow it, including herbs, baby veg, salads, every-day fruits plus gourmet or unusual varieties, and how to fit them into today's stylish small gardens. As well as providing the key facts needed to yield good results and what to do when things go wrong, the text is sprinkled with Alan's personal observations, anecdotes, culinary tips and quirky historical uses. The book takes a very practical approach, starting from scratch for the benefit of anyone who's never grown their own before, but is also ideal for those with some experience who might be growing edibles in a new way - perhaps in a small space that needs to look attractive, or on a new allotment. Lavishly illustrated throughout with over 250 photographs and artworks, this inspirational and authoritative fruit and veg bible from the UK's best-selling and most influential gardener will become a classic in the genre. Approx 250 colour photographs

Originally trained at Hertfordshire College of Horticulture and Royal Botanic Gardens, Kew, Alan Titchmarsh has enjoyed a long career as a gardener, broadcaster and writer. He is the author of over 40 books about gardening, including How to be a Gardener Book 1: Back to Basics, the fastest- selling of all time in the genre. He has twice been named 'Gardening Writer of the Year' and for four successive years was voted 'Television Personality of the Year' by the Garden Writers' Guild. In 2004 he received their Lifetime Achievement Award. He writes regularly in BBC Gardeners' World Magazine, as well as being gardening correspondent for the Daily Express and Sunday Express and is also a best-selling novelist. Alan has appeared on radio and television both as a gardening expert and as an interviewer and presenter. He has presented the annual coverage of The Chelsea Flower Show since 1983, has a weekly programme on BBC Radio 2, and hosts his own daily chatshow on ITV.