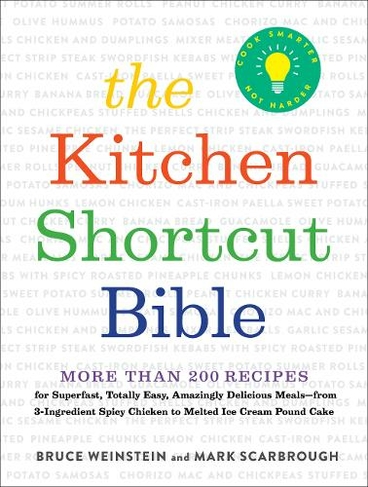 The ultimate collection of recipes to make real food, real fast--with hundreds of ways to cook smarter, not harder. The Kitchen Shortcut Bible is for all of us who love to cook, but never seem to have enough time. Rather than a book of way-too-clever hacks, this is a collection of more than 200 ingenious recipes that supercharge your time in the kitchen without sacrificing high quality or fresh flavor. Bruce Weinstein and Mark Scarbrough come to this, their definitive guide to shortcut cooking, after twenty-nine cookbooks and decades of experience in the kitchen. Not only do they know about putting great meals on the table, they also know that most people's nightly question isn't "what's for dinner," but "what's for dinner in the next half hour?" They've got risotto in minutes, no-fry chicken parm, and melted ice cream pound cake. But these recipes aren't merely "semi-homemade." They've also got slow cooker confits, no-boil stuffed cabbage, and a fine holiday turkey straight out of the freezer, as well as new ways to think about sheet pan suppers, Asian noodle dishes without a wok, and no-churn ice creams. And no MacGuyver-ing either! There are lots of new ways to use the kitchen tools you already own, imparting concrete shortcuts that save time andmake something good into something great. When dinner is a problem to be solved, this is your cheat sheet. 50 4/c photographs

Bruce Weinstein and Mark Scarbrough are the authors of more than 29 cookbooks. Owners of mediaeats, a culinary production company, they were also nominated for 2011 and 2015 James Beard Awards, won a 2015 IACP Award, and are the longest-serving columnists on WeightWatchers.com, as well as regular contributors to the Washington Post, Fine Cooking, and Cooking Light.