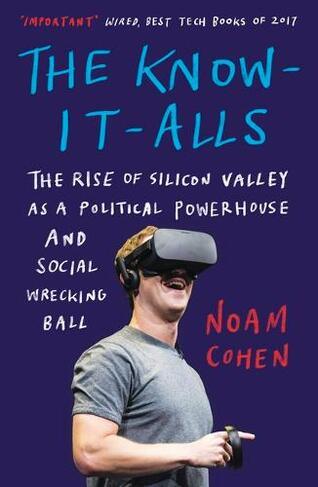 The Know-It-Alls: The Rise of Silicon Valley as a Political Powerhouse and Social Wrecking Ball

By Noam Cohen (Author)
Paperback
£7.69 rrp £10.99 Save £3.30 (30%)
GBP
Availability
In Stock
Free Delivery Available When You Spend £15 Or More
Details
Spend £15 On Products To Receive Free Standard Delivery To Your Home
Share

The world's tech giants are at the centre of controversies over fake news, free speech and hate speech on platforms where influence is bought and sold. Yet, at the outset, almost everyone thought the internet would be a positive, democratic force, a space where knowledge could be freely shared to enable everyone to make better-informed decisions. How did it all go so wrong? Noam Cohen reports on the tech libertarians of Silicon Valley, from the self-proclaimed geniuses Jeff Bezos, Peter Thiel, Reid Hoffman and Mark Zuckerberg to the early pioneers at Stanford University, who have not only made the internet what it is today but reshaped society in the process. It is the story of how the greed, bias and prejudice of one neighbourhood is fracturing the Western world.

Noam Cohen wrote the Link-by-Link column in the New York Times from 2007-15, reporting on Wikipedia, Twitter, Bitcoin, ad blockers and other disruptive technologies. He lives in Brooklyn with his family.