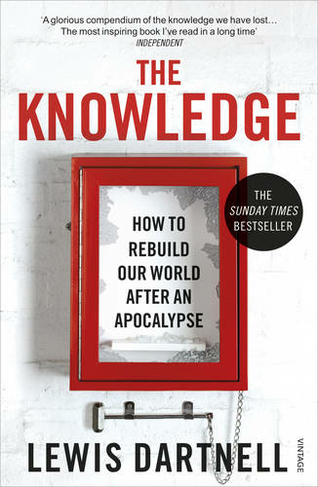 The Knowledge: How To Rebuild Our World After An Apocalypse

By Lewis Dartnell (Author)
Paperback
https://www.whsmith.co.uk/products/the-knowledge-how-to-rebuild-our-world-after-an-apocalypse/lewis-dartnell/paperback/9780099575832-12-000.html £8.19 rrp £9.99 Save £1.80 (18%)
GBP
Availability
In Stock
Free Delivery Available When You Spend £25 Or More
Details
Spend £25 on eligible products to receive free standard delivery to home or free next working day click and collect to store
Share

If the world as we know it ended tomorrow, how would you survive? A nuclear war, viral pandemic or asteroid strike. The world as we know it has ended. You and the other survivors must start again. What knowledge would you need to start rebuilding civilisation from scratch? How do you grow food, generate power, prepare medicines, or get metal out of rocks? Could you avert another Dark Ages, or take shortcuts to accelerate redevelopment? Living in the modern world, we have become disconnected from the basic processes and key fundamentals of science that sustain our lives. Ingenious and groundbreaking, The Knowledge explains everything you need to know about everything, revolutionising your understanding of the world. 'A glorious compendium of the knowledge we have lost in the living...the most inspiring book I've read in a long time' Independent 'A terrifically engrossing history of science and technology' Guardian http://the-knowledge.org/

LEWIS DARTNELL is a UK Space Agency research fellow at the University of Leicester, in the field of astrobiology and the search for signs of life on Mars. He has won several awards for his science writing, and contributes to the Guardian, The Times and New Scientist. He has also written for television and appeared on BBC Horizon, Sky News, Wonders of the Universe, Stargazing Live, and The Sky at Night. A tireless populariser of science, his theory on how the heisters could have saved the gold bullion in the cliff-hanging ending of The Italian Job was mocked on Have I Got News For You. His two previous books are Life in the Universe: a Beginner's Guide and the illustrated children's book My Tourist's Guide to the Solar System and Beyond. When the world ends, he will be ready to start again.