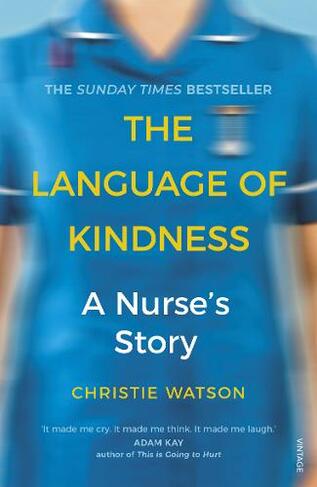 The Language of Kindness: A Nurse's Story

By Christie Watson (Author)
Paperback
https://www.whsmith.co.uk/products/the-language-of-kindness-a-nurses-story/christie-watson/paperback/9781784706883-12-000.html £7.37 rrp £8.99 Save £1.62 (18%)
GBP
Availability
In Stock
Free Delivery Available When You Spend £25 Or More
Details
Spend £25 on eligible products to receive free standard delivery to home or free next working day click and collect to store
Share

Read Costa Award-winning author Christie Watson's incredible No. 1 Sunday Times bestselling memoir of nursing today. 'It made me cry. It made me think. It made me laugh' Adam Kay, author of This is Going to Hurt and Twas the Nightshift Before Christmas Christie Watson was a nurse for twenty years. Taking us from birth to death and from A&E to the mortuary, The Language of Kindness is an astounding account of a profession defined by acts of care, compassion and kindness. We watch Christie as she nurses a premature baby who has miraculously made it through the night, we stand by her side during her patient's agonising heart-lung transplant, and we hold our breath as she washes the hair of a child fatally injured in a fire, attempting to remove the toxic smell of smoke before the grieving family arrive. In our most extreme moments, when life is lived most intensely, Christie is with us. She is a guide, mentor and friend. And in these dark days of division and isolationism, she encourages us all to stretch out a hand. 'A powerful insight into the life of nurses' The Times, Books of the Year 'A remarkable book about life and death and so brilliantly written it makes you hold your breath' Ruby Wax

Christie Watson is an award-winning, bestselling writer. She has been a nurse for over twenty years.The Language of Kindness was published in 2018 and was a number one Sunday Times bestseller. It was a Book of the Year in the Evening Standard, Guardian, i, New Statesman, the Sunday Times and The Times. It has been translated into 23 languages, and is currently being adapted for theatre and television.Her first novel, Tiny Sunbirds Far Away, won the Costa First Novel Award and Waverton Good Read Award and her second novel, Where Women Are Kings, also achieved international critical acclaim.Christie holds an honorary Doctor of Letters for her contribution to nursing and the arts and is Patron of the Royal College of Nursing Foundation. She is Professor of Medical and Health Humanities at the University of East Anglia.www.christiewatsonauthor.co.uk