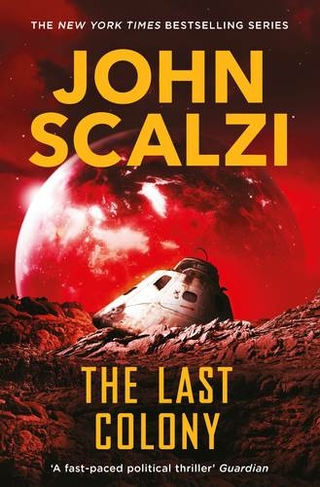 John Scalzi's The Last Colony is the third in The Old Man's War series. They must save themselves - or die trying. John Perry was living peacefully on one of humanity's colonies - until he and his wife were offered an opportunity these ex-supersoldiers couldn't resist. To come out of retirement and lead a new frontier world. However, once on the planet, they discover they've been betrayed. For this colony is a pawn in an interstellar game of war and diplomacy. Humanity's Colonial Union has pitched itself against a new, seemingly unstoppable alien alliance, dedicated to ending all human colonization. As this contest rages above, Perry struggles to keep his terrified colonists alive on the surface below - despite dangerous interstellar politics, violence and treachery. And the planet has yet to reveal its own fatal secrets.

John Scalzi is one of the most popular and acclaimed SF authors to emerge in the last decade. His debut Old Man's War won him science fiction's John W. Campbell Award for Best New Writer. His New York Times bestsellers include The Last Colony, Fuzzy Nation, Lock In, and also Redshirts, which won 2013's Hugo Award for Best Novel. Material from his widely read blog Whatever has also earned him two other Hugo Awards. He lives in Ohio with his wife and daughter.