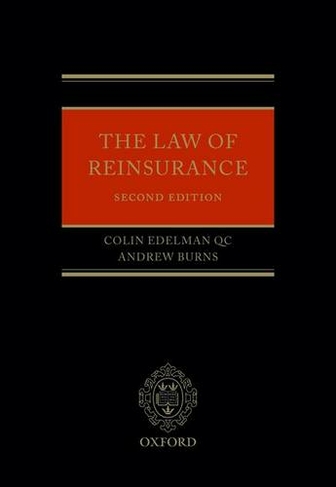 Also available on eBook for £157.31. Click here to purchase from Rakuten Kobo

This concise and accessible guide to reinsurance law is an easy-to-read specialist reference focusing solely on reinsurance. The second edition builds on the success of the first which filled a gap in the market for an easy to use and pithy explanation of the law in this field avoiding the need to recount the whole of general insurance law. With usability and practicality in mind a number of features have been further developed in this edition. The authors have provided more guidance on areas which are undecided by the courts such as Follow the Settlements, incorporation, non-disclosure, and misrepresentation. Areas of complexity such as the role of good faith in reinsurance contracts have also been given greater coverage in this second edition. Also new to this edition is a glossary of reinsurance terms which helps to make the volume even more accessible. This book is both practical and authoritative, and is successful in isolating the key issues in reinsurance law to provide an easy and reliable reference source. It is a must-have work for all reinsurance practitioners.

Colin Edelman QC is a barrister in practice at Devereux Chambers in London. Having graduated from Clare College, Cambridge, he was called to the Bar in 1977 and became a Queen's Counsel in 1995. He was elected Head of Chambers in 2002 and a Bencher of Middle Temple in 2003. In 1993 he was appointed an Assistant Recorder and became a Recorder in 1996. His practice is predominantly in the fields of insurance, reinsurance and professional negligence and he is oftenappointed as an arbitrator in insurance and reinsurance disputes.Andrew Burns is a barrister at Devereux Chambers in London.