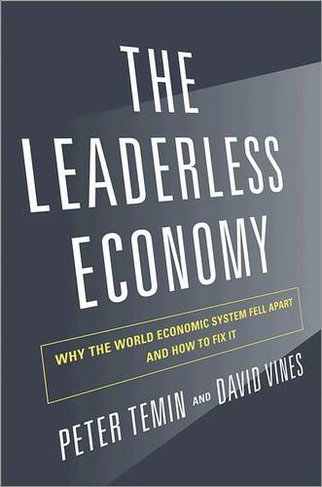 The Leaderless Economy: Why the World Economic System Fell Apart and How to Fix It

The Leaderless Economy reveals why international financial cooperation is the only solution to today's global economic crisis. In this timely and important book, Peter Temin and David Vines argue that our current predicament is a catastrophe rivaled only by the Great Depression. Taking an in-depth look at the history of both, they explain what went wrong and why, and demonstrate why international leadership is needed to restore prosperity and prevent future crises. Temin and Vines argue that the financial collapse of the 1930s was an "end-of-regime crisis" in which the economic leader of the nineteenth century, Great Britain, found itself unable to stem international panic as countries abandoned the gold standard. They trace how John Maynard Keynes struggled for years to identify the causes of the Great Depression, and draw valuable lessons from his intellectual journey. Today we are in the midst of a similar crisis, one in which the regime that led the world economy in the twentieth century--that of the United States--is ending. Temin and Vines show how America emerged from World War II as an economic and military powerhouse, but how deregulation and a lax attitude toward international monetary flows left the nation incapable of reining in an overleveraged financial sector and powerless to contain the 2008 financial panic. Fixed exchange rates in Europe and Asia have exacerbated the problem. The Leaderless Economy provides a blueprint for how renewed international leadership can bring today's industrial nations back into financial balance--domestically and between each other. 1 halftone. 19 line illus. 6 tables.

Peter Temin is the Elisha Gray II Professor Emeritus of Economics at the Massachusetts Institute of Technology. His books include Prometheus Shackled, The Roman Market Economy (Princeton), and The World Economy between the World Wars. David Vines is Professor of Economics and a Fellow of Balliol College, University of Oxford. His books include The IMF and Its Critics and The Asian Financial Crisis.