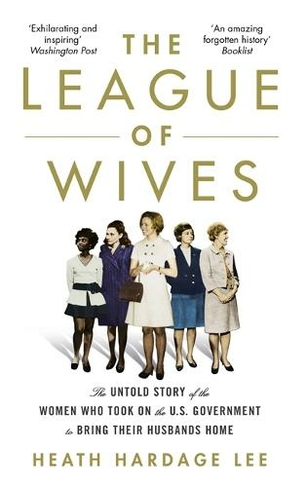 The League of Wives: The Untold Story of the Women Who Took on the US Government to Bring Their Husbands Home

By Heath Hardage Lee (Author)
Paperback
£8.19 rrp £9.99 Save £1.80 (18%)
GBP
Availability
In Stock
Free Delivery Available When You Spend £15 Or More
Details
Spend £15 On Products To Receive Free Standard Delivery To Your Home Or Free Next Day Click and Collect To Stores
Share

Featured in Stylist's guide to 2019's best non-fiction books The true story of the fierce band of women who battled Washington - and Hanoi - to bring their husbands home from the jungles of Vietnam. On 12 February, 1973, one hundred and sixteen men who, just six years earlier, had been high flying Navy and Air Force pilots, shuffled, limped, or were carried off a huge military transport plane at Clark Air Base in the Philippines. These American servicemen had endured years of brutal torture, kept shackled and starving in solitary confinement, in rat-infested, mosquito-laden prisons, the worst of which was The Hanoi Hilton. Months later, the first Vietnam POWs to return home would learn that their rescuers were their wives, a group of women that included Jane Denton, Sybil Stockdale, Louise Mulligan, Andrea Rander, Phyllis Galanti, and Helene Knapp. These women, who formed The National League of Families, would never have called themselves 'feminists', but they had become the POW and MIAs most fervent advocates, going to extraordinary lengths to facilitate their husbands' freedom - and to account for missing military men - by relentlessly lobbying government leaders, conducting a savvy media campaign, conducting covert meetings with antiwar activists, and most astonishingly, helping to code secret letters to their imprisoned husbands. In a page-turning work of narrative non-fiction, Heath Hardage Lee tells the story of these remarkable women for the first time. The League of Wives is certain to be on everyone's must-read list. 2x 8pp plate sections

Heath Hardage Lee comes from a museum education and curatorial background, and she has worked at history museums across the US. She holds a BA in History with Honours from Davidson College, and an MA in French Language and Literature from the University of Virginia. Heath served as the 2017 Robert J. Dole Curatorial Fellow: her exhibition entitled The League of Wives: Vietnam POW MIA Advocates & Allies about Vietnam POW MIA wives premiered at the Robert J. Dole Institute of Politics in May of 2017 and is now travelling to museums throughout the US. Potomac Books published Heath's first book, Winnie Davis: Daughter of the Lost Cause, in 2014. Winnie won the 2015 Colonial Dames of America Annual Book Award as well as a 2015 Gold Medal for Nonfiction from the Independent Publisher Book Awards. Heath lives in Roanoke, Virginia, with her husband and her two children.