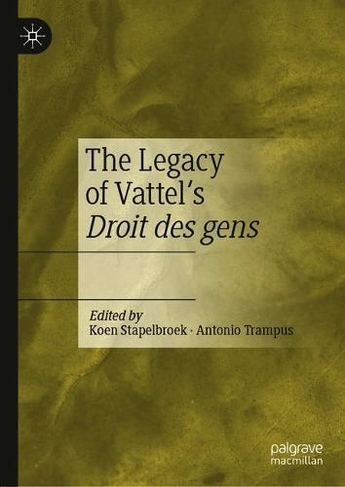 This edited collection offers a reassessment of the complicated legacy of Emer de Vattel's Droit des gens, first published in 1758. One of the most influential books in the history of international law and a major reference point in the fields of international relations theory and political thought, this book played a role in the transformation of diplomatic practice in the eighteenth and nineteenth century. But how did Vattel's legacy take shape? The volume argues that the enduring relevance of Vattel's Droit des gens cannot be explained in terms of doctrines and academic disciplines that formed in the late nineteenth and twentieth centuries. Instead, the chapters show how the complex reception of this book took shape historically and why it had such a wide geographical and disciplinary appeal until well into the twentieth century. The volume charts its reception through translations, intellectual, ideological and political appropriations as well as new practical usages, and explores Vattel's discursive and conceptual innovations. Drawing on a wide range of sources, such as archive memoranda and diplomatic correspondences, this volume offers new perspectives on the book's historical contexts and cultures of reception, moving past the usual approach of focusing primarily on the text. In doing so, this edited collection forms a major contribution to this new direction of study in intellectual history in general and Vattel's Droit des gens in particular. 1 Illustrations, black and white; IX, 296 p. 1 illus.