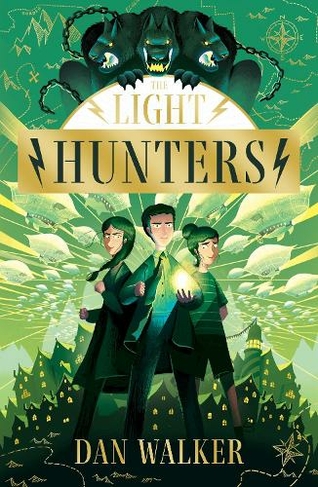 By Dan Walker (Author)
Paperback
https://www.whsmith.co.uk/products/the-light-hunters/dan-walker/paperback/9781912979103-12-000.html £6.55 rrp £7.99 Save £1.44 (18%)
GBP
Availability
In Stock
Free Delivery Available When You Spend £25 Or More
Details
Spend £25 on eligible products to receive free standard delivery to home or free next working day click and collect to store
Share

The first in a new electrifying Middle Grade series from author of SKY THIEVES, Dan Walker. "You ask me what Light is, Lux? Light is everything. Every single thing. The very fabric of our world is made up of this force - people, trees, the chair I am sitting on, this pen I am writing with. Few can access this Light, control it. You are one." Huge Monsters roam the land, smashing towns to splinters. For centuries, energy-wielding Light Hunters battled the creatures, rescuing the townspeople of Daven from a terrible fate. Then, a single, disastrous mistake turned the people against Light. Now, this powerful and ancient force is mostly gone, all but a memory. Lux Dowd lives in a clock repair shop with his ill Grandpa and the old man's live-in carer, Miss Hart. Although he might seem to be a normal 12 year old boy, Lux has a secret: not only can he wield Light, he might be the finest Light-healer the world has ever seen. But when Lux uses his power to save his best friend Maya, his Light draws a strange, shadowy figure to town, one who would use Lux's powers for evil. He is rescued from the stranger's clutches by Miss Hart, who reveals to him that she is one of the last of the undercover Light Hunters tasked with watching over Lux. After a dangerous air ship journey to the Light Hunter HQ, Lux begins to learn the Light Hunter ways and form a bond with his new squad of apprentice hunters. But before he can settle, the Hunters receive a warning about an upcoming Monster attack near Lux's hometown. The Monster that destroyed his family is back. Lux and his new friends find themselves in a race against time to locate the Monster and stop it before it can destroy the town. But is the Monster the real terror, or is there a greater danger lurking in the shadows, waiting for its moment to strike? CPSIA choking hazard - No choking hazard warning necessary EU Toy Safety Directive - No warning