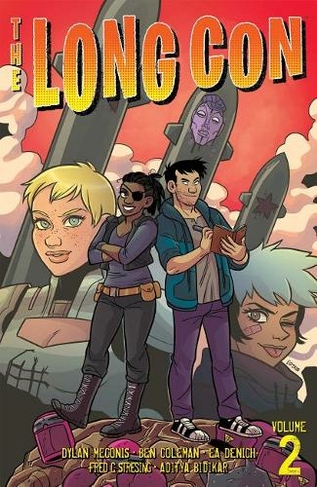 The action and hilarity continue in the second volume of this comic convention apocalypse adventure series! Journalist Victor Lai and his comics publicist friend Dez Delaney have clawed, crawl

Dylan Meconis is an Eisner, Reuben, and Kim Yale-nominated cartoonist. She's the creator of graphic novels Bite Me!, Family Man, Outfoxed, and the forthcoming Queen of the Sea (Candlewick, 2019). She's a studio member of Helioscope in Portland, Oregon. Ben Coleman is a freelance writer and a film and culture critic for the Portland Mercury. He was an ensemble member and contributing writer to Atomic Arts, the innovative and nationally-recognized theater company that reimagined shows like Star Trek for live audiences. EA Denich is a cartoonist and illustrator. Her graphic novel debut was as the artist for the #1 Amazon best-selling graphic novel Yes, Roya (Iron Circus Comics). She lives in Southern California.