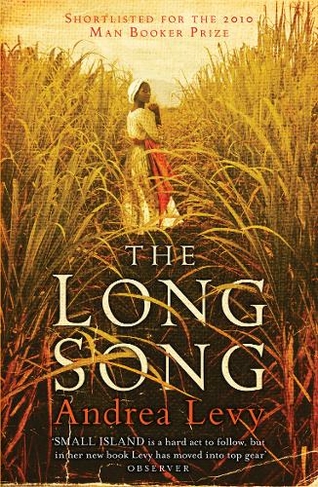 By Andrea Levy (Author)
Paperback
https://www.whsmith.co.uk/products/the-long-song-shortlisted-for-the-man-booker-prize-2010-now-a-major-bbc-drama/andrea-levy/paperback/9780755359424-12-000.html £8.19 rrp £9.99 Save £1.80 (18%)
GBP
Availability
In Stock
Free Delivery Available When You Spend £25 Or More
Details
Spend £25 on eligible products to receive free standard delivery to home or free next working day click and collect to store
Share

Now a major BBC TV drama, starring Tamara Lawrance, Lenny Henry and Hayley Atwell. A Sunday Times bestseller, shortlisted for the Man Booker Prize, The Long Song by Andrea Levy is a hauntingly beautiful, heartbreaking and unputdownable novel of the last days of slavery in Jamaica, for those who loved Homegoing, The Underground Railroad, or the film 12 Years a Slave. 'A marvel of luminous storytelling' Financial Times You do not know me yet. My son Thomas, who is publishing this book, tells me, it is customary at this place in a novel to give the reader a little taste of the story that is held within these pages. As your storyteller, I am to convey that this tale is set in Jamaica during the last turbulent years of slavery and the early years of freedom that followed. July is a slave girl who lives upon a sugar plantation named Amity and it is her life that is the subject of this tale. She was there when the Baptist War raged in 1831, and she was present when slavery was declared no more. My son says I must convey how the story tells also of July's mama Kitty, of the negroes that worked the plantation land, of Caroline Mortimer the white woman who owned the plantation and many more persons besides - far too many for me to list here. But what befalls them all is carefully chronicled upon these pages for you to peruse. Perhaps, my son suggests, I might write that it is a thrilling journey through that time in the company of people who lived it. All this he wishes me to pen so the reader can decide if this is a novel they might care to consider. Cha, I tell my son, what fuss-fuss. Come, let them just read it for themselves.

After she passed away on the 14th of February 2019, the Bookseller wrote: 'Andrea Levy will be remembered as a novelist who broke out of the confines assigned to her by prejudice to become a both a forerunner of Black British excellence and a great novelist by any standards.' Born in England to Jamaican parents who came to Britain in 1948, Andrea Levy wrote the novels that she had always wanted to read as a young woman, engaging books that reflect the experiences of black Britons and at the intimacies that bind British history with that of the Caribbean. She was described by BBC News as 'a writer who tackled important social issues . . . her writing . . . witty, humane and often moving, and full of richly drawn characters'.She was the author of six books, including SMALL ISLAND, which won the Orange Prize for Fiction, and the Whitbread book of the Year, and was adapted for TV and for the stage, by the National Theatre. It was selected by the BBC as one of its '100 Novels That Shaped Our World'. Her most recent novel, THE LONG SONG, won the Walter Scott Prize and was shortlisted for the Man Booker Prize, and was adapted for TV by the BBC.