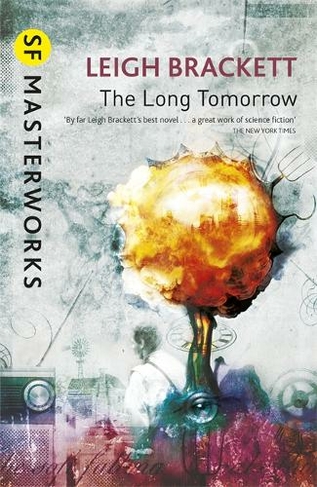 By Leigh Brackett (Author)
Paperback
https://www.whsmith.co.uk/products/the-long-tomorrow-sf-masterworks/leigh-brackett/paperback/9780575131569-12-000.html £7.37 rrp £8.99 Save £1.62 (18%)
GBP
Availability
In Stock
Free Delivery Available When You Spend £25 Or More
Details
Spend £25 On Products To Receive Free Standard Delivery To Your Home Or Free Next Working Day Click And Collect To Store
Share

'No city, no town, no community of more than one thousand people or two hundred buildings to the square mile, shall be built or permitted to exist anywhere in the United States of America.' Thirtieth Amendment to the Constitution of the United States Two generations after the nuclear holocaust, rumours persisted about a secret desert hideaway where scientists worked with dangerous machines and where men plotted to revive the cities. Almost a continent away, Len Coulter heard whisperings that fired his imagination. Then one day he found a strange wooden box ...

Leigh Brackett was an accomplished and prolific writer of fantasy and SF, as well as a Hollywood screen writer. She worked on scripts for films such as THE BIG SLEEP, THE LONG GOODBYE and RIO BRAVO, and received a posthumous HUGO AWARD for the script for THE EMPIRE STRIKES BACK.