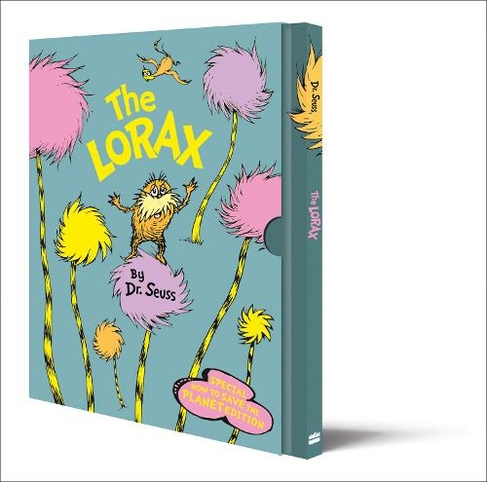 The Lorax: Special How to Save the Planet edition

The timeless ecological fable from the iconic Dr. Seuss. Help the Lorax save the planet with this very special slipcase edition of the classic picture book. "'Mister!' He said with a sawdusty sneeze, 'I am the Lorax. I speak for the trees.'" The Lorax is the original eco-warrior and his message still rings loud today in this fable about the dangers of destroying our forests, told in the trademark rhyme of the irrepressible Dr. Seuss. This special eco-friendly slipcased edition is printed on 100% recycled paper, and contains some easy tips to follow to help the Lorax save the planet. With his unique combination of hilarious stories, zany pictures and riotous rhymes, Dr. Seuss has been delighting young children and helping them learn to read for over fifty years. Creator of the wonderfully anarchic Cat in the Hat, and ranked among the UK's top ten favourite children's authors, Dr. Seuss is a global best-seller, with over half a billion books sold worldwide.

Theodor Seuss Geisel - better known to millions of his fans as Dr. Seuss - was born the son of a park superintendent in Springfield, Massachusetts, in 1904. After studying at Dartmouth College, New Hampshire, and later at Oxford University in England, he became a magazine humorist and cartoonist, and an advertising man. He soon turned his many talents to writing children's books, and his first book - 'And To Think That I Saw It On Mulberry Street' - was published in 1937. His greatest claim to fame was the one and only 'The Cat in the Hat', published in 1957, the first of a hugely successful range of early learning books.