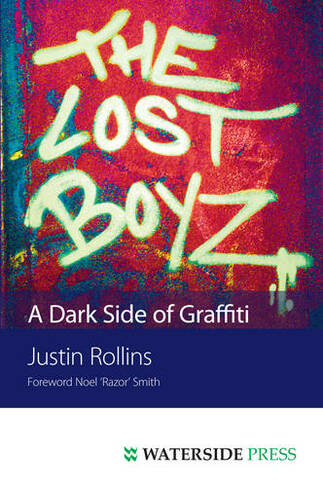 The Lost Boyz: A Dark Side of Graffiti

For those who equate graffiti tagging with the cosy quirkiness of Banksy or the colourful artistry of wasteground murals - this book will be a real eye-opener. 'The Lost Boyz documents Justin's road to change and redemption. This is the story of almost feral youth, spraying their mark on the urban chaos of pre-millenium London. A story of what it's like to grow up as a confused and mentally unstable child of mixed race in a predominantly white area. A story of mental torture, racism and extreme violence. The Lost Boyz takes the reader through the dirty back streets and dark alleys of south London where vicious gangs of graffiti taggers fought an all-out turf war that left many victims and casualties in its wake. The Lost Boyz squandered their youth in a nihilistic rush towards oblivion. And some did not survive the journey. Justin Rollins was one of the lucky ones...He spent years in prison before managing to wrest back some control over his life. Now in his mid 20s Justin is a changed man, hardly recognisable (both physically and mentally) to the youth I first met. He now has a young daughter of his own and is reconciled with the family he once felt so distant from. He no longer drinks or takes drugs, and nor does he see himself as separate from the rest of society. In writing this book, which was a long and painful journey for him, Justin hopes to lay his ghosts of the past to rest. And if it serves as a warning to even one kid who may be starting out on the same road, then it is a job well done': Noel 'Razor' Smith, crime writer (from the Foreword) .

Justin Rollins grew-up on the streets of south-London. He is now in his twenties and works as a security guard. Noel 'Razor' Smith is the best-selling author of A Few Kind Words and a Loaded Gun and works for the prison newspaper Inside Time