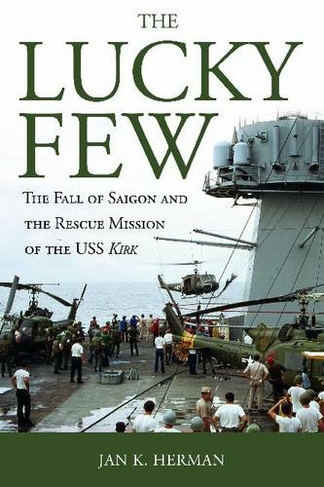 The Lucky Few: The Fall of Saigon and the Rescue Mission of the USS Kirk

As the Vietnam War reached its tragic climax in the last days of April 1975, a task force of U.S. Navy ships cruised off South Vietnam's coast. The Lucky Few focuses on the role of USS Kirk in the rescue of not only the remnants of the South Vietnamese fleet but also 32,000 refugees fleeing from Communist forces to the safety of the Seventh Fleet ships offshore. Although the Vietnam War ended in chaos and shame, the epic story of USS Kirk and her success in rendering humanitarian assistance under inconceivable circumstances is one of America's shining military involvements. The Lucky Few brings to light this relatively unknown heroic tale of a people caught up in the death throes of a nation and their subsequent passage to freedom. Illustrations

Jan K. Herman served as the historian of the Navy Medical Department and as special assistant to the Surgeon General for thirty-three years. He also produced an hour-long documentary, The Lucky Few, which has gained international acclaim since its premiere at the Smithsonian in 2010. He is the author of Battle Station Sick Bay and lives in Takoma Park, MD.