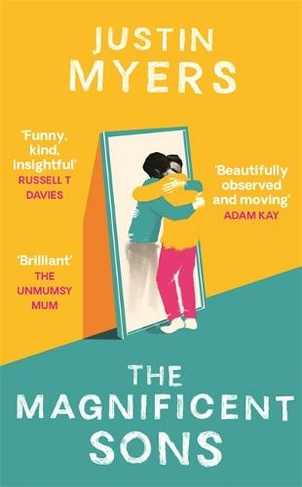 The Magnificent Sons: a coming-of-age novel full of heart, humour and unforgettable characters

'Funny, beautifully observed and moving' Adam Kay 'Tales Of The City for a new generation . . . smart, touching, razor-sharp one-liners, a life-affirming read . . . I fell utterly in love with it' John Marrs 'Funny, kind, insightful book, about those who get left behind' Russell T Davies Two brothers. Two different journeys. The same hope of a magnificent future. At twenty-nine, Jake D'Arcy has finally got his life just right. Job with prospects: check. Steady girlfriend: check. Keeping his exhausting, boisterous family at bay: check. So why isn't he happier? When his confident, much-adored younger brother Trick comes out as gay to a rapturous response, Jake realises he has questions about his own repressed bisexuality, and that he can't wait any longer to find his answers. As Trick begins to struggle with navigating the murky waters of adult relationships, Jake must confront himself and those closest to him. He's beginning to believe his own life could be magnificent, if he can be brave enough to make it happen . . . 'Just wonderful. Warm, funny and believable, with characters you feel you know. And with, as ever, some enviably KILLER lines' Marina O'Loughlin 'MAGNIFICENT. It's all about the complicated issues of families and sexuality, the writing is pacy, smart and funny, and the storytelling is first-rate' Adam Kay, bestselling author of This is Going to Hurt 'With razor sharp observation, this coming of age story is full of heart' Sunday Mirror 'Raw and honest, more complex and real than most coming out stories' The i Paper 'Original, compelling, touching and funny' Francesca Hornak, author of Seven Days of Us 'A funny, keenly observed tale about relationships and identity' Red Magazine 'Brilliant. I fell in love with Jake and there was something special about reading the brothers' stories unfold while keeping one eye on my own magnificent sons playing in our garden' The Unmumsy Mum 'Really funny, really moving, really sweet, a really great read . . . I tore through it . . . Love it!' Lindsey Kelk 'The Magnificent Sons is a compelling story that explores the intricacies of family and sexuality, while being entertaining and amusing; pick yourself a sunny afternoon and devour it!' Is That You Darling 'Justin Myers (AKA The Guyliner) brings his signature wit and empathy to this portrait of a larger-than-life family at a crossroads. It sparkles with humour' Isabel Costello More praise for Justin Myers: 'Extremely funny, with real heart, depth and resonance' Daisy Buchanan 'Insightful, heartfelt and witty' Laura Jane Williams 'So funny and sharp, yet tender and emotional too' Jill Mansell 'Brilliant, funny and incisive' Stylist

Justin Myers is a writer from Shipley, Yorkshire, who now lives in London. After years working in journalism, he began his popular blog The Guyliner in 2010. Justin spent five years writing dating and relationship advice for Gay Times, before joining British GQ as a weekly columnist in 2016. His work has appeared in a number of publications including the Guardian, The i, Sunday Times Style and the Irish Times. His debut novel, The Last Romeo, was published in 2018, and a second, The Magnificent Sons, is out May 2020.