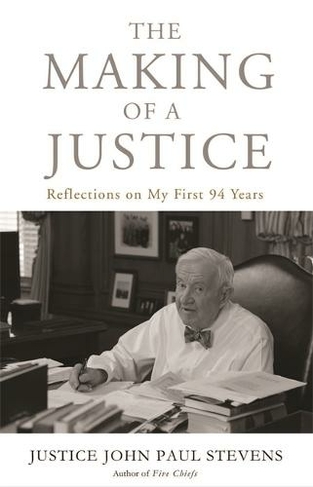 The Making of a Justice: Reflections on My First 94 Years

When Justice John Paul Stevens retired from the Supreme Court in 2010, he left a legacy of service unequaled in the history of the Court. During his 34-year tenure, Justice Stevens wrote more opinions than any other justice has. In THE MAKING OF A JUSTICE, John Paul Stevens recounts the first ninety-four years of his extraordinary life, offering an intimate and illuminating account of his service on the nation's highest court. Appointed by President Gerald Ford and eventually retiring during President Obama's first term, Justice Stevens has been witness to, and an integral part of, landmark changes in American society. With stories of growing up in Chicago, his work as a Naval traffic analyst at Pearl Harbor during World War II, and his early days in private practice, as well as a behind-the-scenes look at some of the most important Supreme Court decisions over the last four decades, THE MAKING OF A JUSTICE offers a warm and fascinating account of Justice Stevens' unique and transformative American life.This comprehensive memoir is a must read for those trying to better understand our country and the Constitution.

Justice John Paul Stevens served on U.S. Supreme Court from 1975 until his retirement in 2010. He is the third-longest serving Justice ever. Born in Chicago, Illinois, in 1920, Stevens served in the United States Navy during World War II and graduated from Northwestern University School of Law. He was appointed to the Seventh Circuit Court of Appeals in 1970 by President Richard Nixon and to the Supreme Court in 1975 by Gerald Ford. He is the author of Five Chiefs and Six Amendments.