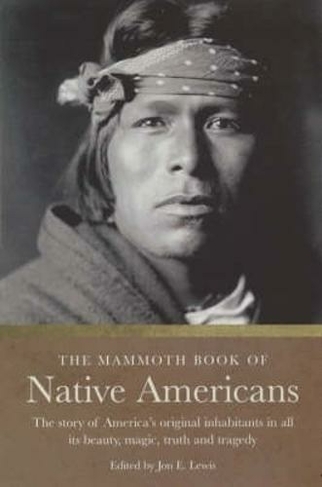 By Jon E. Lewis (Contributor)
Paperback
https://www.whsmith.co.uk/products/the-mammoth-book-of-native-americans-mammoth-books/jon-e-lewis/paperback/9781841195933-12-000.html N/A
GBP
Availability
Currently unavailable. We dont know when or if this item will be back in stock
Free Saver Delivery on orders over £25
Details
FREE SHIPPING over £25 for Saver Delivery
Share

Native Americans make up less than one per cent of the total US population but represent half the nation's languages and cultures. Here, in one grand sweep, is the full story of Native American society, culture and religion. Here is everything from the land-based spirituality of their early creation myths and the late rise of Indian Pride, to the 88 uses to which the Sioux put the flesh and bones of the buffalo and the practice of berdache (men adopted as women). The book offers a chronological history of America's indigenous peoples. It covers their dramatic early entry into North America, out of the now submerged continent of Beringia, then in more recent times the 'forgotten wars' of the 16th and 17th centuries, which wiped many tribes from the face of the East Coast, and finally describes to the last struggles of the Cheyenne and the Comanche. Celebrating these peoples' way of life rather than focusing narrowly on the manner of their genocide, it does not ignore uncomfortable facts of the Amerindian past - including the cannibalism believed to have been practised by some tribes and the Native Americans' part in the decimation of North America's buffalo herds.

Jon E. Lewis is a historian and writer, whose books on history and military historyare sold worldwide. He is also editor of many The Mammoth Book of anthologies, including the bestselling On the Edge and Endurance and Adventure.He holds graduate and postgraduate degrees in history. His work has appeared in New Statesman, the Independent, Time Out and the Guardian. He lives in Herefordshire with his partner and children.Praise for his previous books:England: The Autobiography:'A triumph' Saul David, author of Victoria's ArmyThe British Soldier: The Autobiography:'this thoughtful compilation . . . almost unbearably moving.' Guardian'Compelling tommy's eye view of war.' Daily Telegraph'What a book. Five stars.' Daily Express