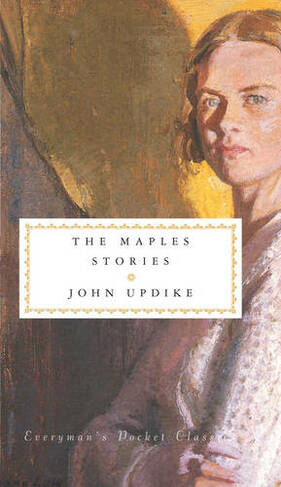 In 1956 John Updike wrote a short story about newly-weds Joan and Richard Maple. Over the next two decades he returned to this couple again and again, tracking their years together as they raise children and deal with the heartbreak of infidelity and estrangement. Gathered here for the first time in hardcover - and with the addition of a later story, 'Grandparenting', that shows us the Maples after their divorce - THE MAPLES STORIES offers a nuanced portrait of two deeply flawed but moving characters and their entwined lives. 'Though the Maples stories trace the decline and fall of a marriage, they also illumine a history in many ways happy, of growing children and a million mundane moments shared. That a marriage ends is less than ideal; but all things end under heaven, and if temporality is held to be invalidating, then nothing really succeeds. The moral of these stories is that all blessings are mixed.' - From the Foreword by John Updike

John Updike was born in 1932, in Shillington, Pennsylvania. He graduated from Harvard College in 1954, and spent a year in Oxford, England, at the Ruskin School of Drawing and Fine Art. From 1955 to 1957 he was a member of the staff of The New Yorker, and since 1957 has lived in Massachusetts. He is the father of four children and the author of more than fifty books, including collections of short stories, poems, essays, and criticism. His novels have won the Pulitzer Prize (twice), the National Book Award, the National Book Critics Circle Award, the Rosenthal Award, and the Howells Medal. A previous collection of essays, Hugging the Shore, received the 1983 National Book Critics Circle Award for criticism.