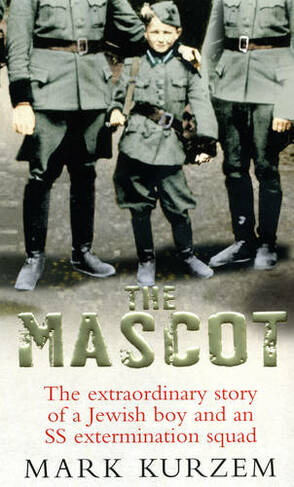 The Mascot: The extraordinary story of a Jewish boy and an SS extermination squad

Part thriller, part psychological drama, part puzzle with a strange twist, The Mascot is one of the most astonishing stories to emerge from the Second World War. It tells the remarkable true story of how Alex Kurzem unravelled the shocking secrets of his wartime past. With the support of Mark, his son, Alex began to recall how he evaded the German-led execution squad that decimated his village, but witnessed the murder of his Jewish mother and siblings. He scavenged amongst the trees and protected himself from wolves, before falling into the hands of a Latvian police battalion. The soldiers adopted him as their mascot and Alex accompanied the unit everywhere as it changed its identity and duties to those of an SS unit on the rampage. He even appeared in Nazi propaganda films and newspaper articles, riding into Riga in a military parade... yet he was Jewish. At the age of five, was Alex Kurzem a collaborator or just a lost little boy? Caught up in a world of war-crime hunters, former war criminals and security agents with unclear agendas, he has since been threatened by many who believe he has betrayed them.

Mark Kurzem grew up in Melbourne, Australia. He read Anthropology at the University of Oxford, where he was a Commonwealth Scholar, and also studied at Melbourne, Jochi and Tokyo universities where he was a Monbusho Research Scholar. He has worked in the fields of political research, international relations, teaching and film-making in Japan, Australia and the U.K. In 2002 he co-produced and wrote a documentary about his father's life, also titled The Mascot, which was the subject of international attention. He lives in Oxford.