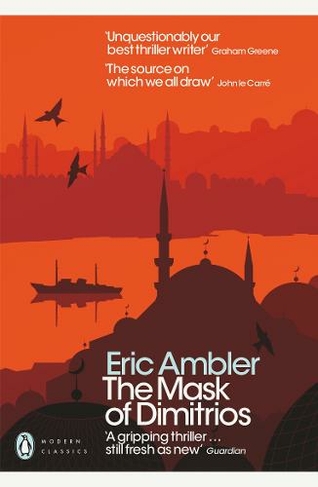 The Mask of Dimitrios

'Not Le Carre, not Deighton, not Ludlum have surpassed the intelligence, authenticity or engrossing storytelling that established The Mask of Dimitrios as the best of its kind' The Times English crime novelist Charles Latimer is travelling in Istanbul when he makes the acquaintance of Turkish police inspector Colonel Haki. It is from him that he first hears of the mysterious Dimitrios - an infamous master criminal, long wanted by the law, whose body has just been fished out of the Bosphorus. Fascinated by the story, Latimer decides to retrace Dimitrios' steps across Europe to gather material for a new book. But, as he gradually discovers more about his subject's shadowy history, fascination tips over into obsession. And, in entering Dimitrios' criminal underworld, Latimer realizes that his own life may be on the line. 'A gripping thriller ... still fresh as new' Guardian no illustrations

Eric Ambler (1909-98) was one of the most fascinating British writers of the late 1930s. His novels retain a remarkable sense of the dread and terror that filled Europe as world war broke out. Some were made into films (not least Orson Welles' superb version of Journey into Fear), all were bestsellers, inventing a new, more realistic form of spy novel, where the main protagonist is not so much a hero as a victim, pursued by malevolent Fascist forces of overwhelming power. These are paranoid stories, but written at a time when paranoia was disturbingly close to common sense.