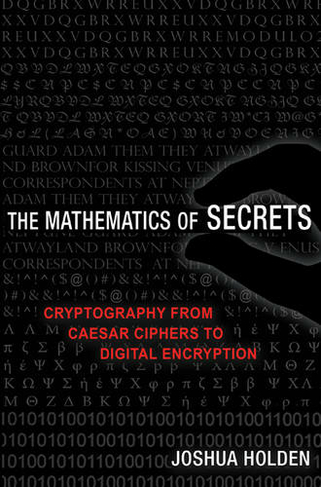 The Mathematics of Secrets Cryptography from Caesar Ciphers to Digital Encryption

The Mathematics of Secrets takes readers on a fascinating tour of the mathematics behind cryptography--the science of sending secret messages. Most books about cryptography are organized historically, or around how codes and ciphers have been used, such as in government and military intelligence or bank transactions. Joshua Holden instead shows how mathematical principles underpin the ways that different codes and ciphers operate. Holden focuses on both code making and code breaking and he discusses the majority of ancient and modern ciphers currently known. Holden begins by looking at substitution ciphers, built by substituting one letter or block of letters for another. Explaining one of the simplest and historically well-known ciphers, the Caesar cipher, Holden establishes the key mathematical idea behind the cipher and discusses how to introduce flexibility and additional notation. Holden goes on to explore polyalphabetic substitution ciphers, transposition ciphers, including one developed by the Spartans, connections between ciphers and computer encryption, stream ciphers, and ciphers involving exponentiation. He also examines public-key ciphers, where the methods used to encrypt messages are public knowledge, and yet, intended recipients are still the only ones who are able to read the message. He concludes with a look at the future of ciphers and where cryptography might be headed. Only basic mathematics up to high school algebra is needed to understand and enjoy the book. With a plethora of historical anecdotes and real-world examples, The Mathematics of Secrets reveals the mathematics working stealthily in the science of coded messages. 1 halftone. 98 line illus. 27 tables.

Joshua Holden is professor of mathematics at the Rose-Hulman Institute of Technology.