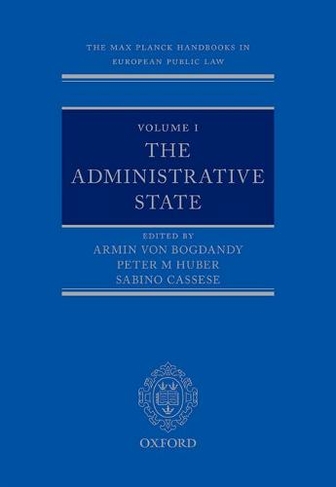 The Max Planck Handbooks in European Public Law: Volume I: The Administrative State

Also available on eBook for £133.91. Click here to purchase from Rakuten Kobo

The Max Planck Handbooks in European Public Law series describes and analyses the public law of the European legal space, an area that encompasses not only the law of the European Union but also the European Convention on Human Rights and, importantly, the domestic public laws of European states. Recognizing that the ongoing vertical and horizontal processes of European integration make legal comparison the task of our time for both scholars and practitioners, it aims to foster the development of a specifically European legal pluralism and to contribute to the legitimacy and efficiency of European public law. The first volume of the series begins this enterprise with an appraisal of the evolution of the state and its administration, with cross-cutting contributions and also specific country reports. While the former include, among others, treatises on historical antecedents of the concept of European public law, the development of the administrative state as such, the relationship between constitutional and administrative law, and legal conceptions of statehood, the latter focus on states and legal orders as diverse as, e.g., Spain and Hungary or Great Britain and Greece. With this, the book provides access to the systematic foundations, pivotal historic moments, and legal thought of states bound together not only by a common history but also by deep and entrenched normative ties; for the quality of the ius publicum europaeum can be no better than the common understanding European scholars and practitioners have of the law of other states. An understanding thus improved will enable them to operate with the shared skills, knowledge, and values that can bring to fruition the different processes of European integration.

Peter M Huber is a Justice of the Federal Constitutional Court of Germany, and holds the Chair of Public Law and Constitutional Philosophy at the Ludwig-Maximilian University of Munich. He was a member of the Commission on Media Concentration Control (2002-09), head of the German Law Faculties Association from 1999-2009, and has been a member of various parliamentary commissions, in addition to a role as Minister of the Interior of Thuringia (2009-10). He is theco-editor of Current Problems in the Protection of Human Rights: Perspectives from Germany and the UK (with K Ziegler, 2013) and of Legal Challenges in the Global Financial Crisis: Bail-outs, the Euro and Regulation (with W-G Ringe, 2014).Armin von Bogdandy is Director of the Max Planck Institute for Comparative Public Law and International Law and Professor for Public Law at the University in Frankfurt/Main. He has been President of the OECD Nuclear Energy Tribunal as well as a member of the German Science Council (Wissenschaftsrat) and the Scientific Committee of the European Union Agency for Fundamental Rights; he has held visiting positions at the NYU School of Law, the European University Institute, the XiamenAcademy of International Law, and the Universidad Nacional Autonoma de Mexico, among others. Von Bogdandy is the recipient of the Leibniz Prize, the prize for outstanding scientific achievements in the field of legal and economic foundations by the Berlin-Brandenburg Academy of Sciences, the Premio Internacional'Hector Fix Zamudio', and the 'Mazo' (gavel) of the Interamerican Court of Human Rights. His research centres on the structural changes affecting public law.Sabino Cassese is Justice Emeritus of the Italian Constitutional Court and Emeritus professor at the Scuola Normale Superiore of Pisa. He teaches at the Luiss University School of Government, Rome. He was assistant professor at the Universities of Pisa and Rome and, since 1961, has served as professor at the Universities of Urbino, Naples, and Rome. In 1993-94 he was a member of the Italian Government; from 2005 to 2014, he served as a Justice on the Italian Constitutional Court. JusticeCassese has received a doctor honoris causa degree from seven universities: Aix-en-Provence, Cordoba, Paris II, Castilla-La Mancha, Athens, Macerata, and the European University Institute. His recent publications include: When legal orders collide: the Role of Courts (2010); The Global Polity: GlobalDimensions of Democracy and the Rule of Law (2012); New Trends in Italian Public Law (ed, with L. Torchia, 2012); and Research Handbook on Global Administrative Law (ed, 2016).