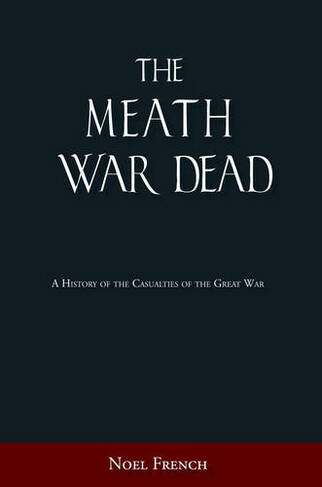 Over five hundred men from Meath died in the Great War. One hundred of those men were from Navan. Twenty Meath families lost more than one member in this war. The poet, Francis Ledwidge, would be the most famous of these, but many personal tragedies play out in the details of the book: fathers who never saw their children, teenagers who never had the opportunity to grow to adulthood, young men traumatised by the horrific conditions of the trenches. Their lives and those of their families are recorded in what is the first major project to commemorate the war dead of Meath. These men were not just statistics; each was an individual human being. Not only are the dates and places of deaths of each man recorded but the author attempts to give some background details including parents, dates of baptisms, occupations of their parents and their own occupations. The Meath war dead are a part of our identity, a shared heritage which has been hidden and disregarded for too long.

NOEL FRENCH has been director of the Meath Heritage Centre, Trim since 1987. Holding an M.A. in Local Studies from NUI Maynooth Noel has been writing about the county since the 1980s. He has written twelve local histories and has had a number of articles published in Riocht na Midhe. He is a former secretary of the Meath Archaeological and Historical Society.