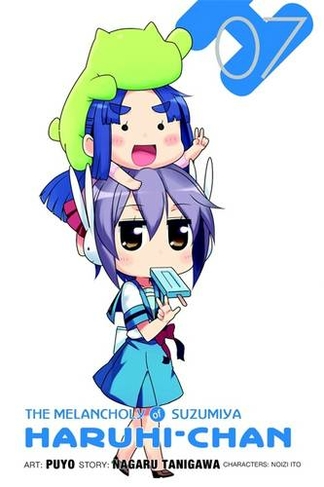 The Melancholy of Suzumiya Haruhi-chan, Vol. 7

What fate does the future hold for Kyon and Haruhi?!Koizumi and his fellows from the Agency are constantly cooking up ways to gently (*ahem*) encourage romantic feelings between Kyon and Haruhi, but Koizumi's holiday board game tests the very limit of Haruhi and Kyon's acting abilities! Thankfully there's plenty of other holiday fun to be had, including the many fine offerings of autumn and the dawn of a new year (spent dodging Koizumi's machinations)!! You'll find plenty of gags and guffaws as Haruhi dives into the world of four-panel and short comics!!

Nagaru Tanigawa is a Japanese author best known for The Melancholy of Haruhi Suzumiya for which he won the grand prize at the eighth annual Sneaker Awards. Tanigawa is currently working on the tenth novel about Haruhi Suzumiya and the S.O.S. Brigade.