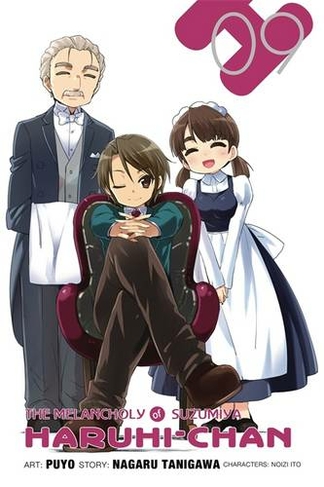 The Melancholy of Suzumiya Haruhi-chan, Vol. 9

It's a shock that there's a freshman willing to take on Haruhi's Brigade Entrance Examination!But it's just as much a delight to finally have someone willing to fight against the tyranny of the straight man... Or so one would hope. With Yasumi Watahashi now on the scene, Kyon's straight man game is soaring to new heights, Asahina is going crazy, and Haruhi is acting more like a Brigade Chief than ever before! And what of the feline-ified Kuyoh at Nagato's house--when Kyon faces off with her, what could his fate possibly be!?

Nagaru Tanigawa is a Japanese author best known for The Melancholy of Haruhi Suzumiya for which he won the grand prize at the eighth annual Sneaker Awards. Tanigawa is currently working on the tenth novel about Haruhi Suzumiya and the S.O.S. Brigade.