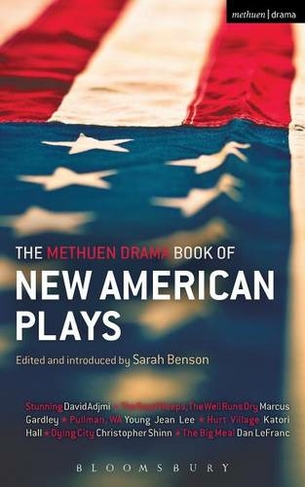 The Methuen Drama Book of New American Plays is an anthology of six outstanding plays from some of the most exciting playwrights currently receiving critical acclaim in the States. It showcases work produced at a number of the leading theatres during the last decade and charts something of the extraordinary range of current playwriting in America. It will be invaluable not only to readers and theatergoers in the U.S., but to those around the world seeking out new American plays and an insight into how U.S. playwrights are engaging with their current social and political environment. There is a rich collection of distinctive, diverse voices at work in the contemporary American theatre and this brings together six of the best, with work by David Adjmi, Marcus Gardley, Young Jean Lee, Katori Hall, Christopher Shinn and Dan LeFranc. The featured plays range from the intimate to the epic, the personal to the national and taken together explore a variety of cultural perspectives on life in America. The first play, David Adjmi's Stunning, is an excavation of ruptured identity set in modern day Midwood, Brooklyn, in the heart of the insular Syrian-Jewish community; Marcus Gardley's lyrical epic The Road Weeps, The Well Runs Dry deals with the migration of Black Seminoles, is set in mid-1800s Oklahoma and speaks directly to modern spirituality, relocation and cultural history; Young Jean Lee's Pullman, WA deals with self-hatred and the self-help culture in her formally inventive three-character play; Katori Hall's Hurt Village uses the real housing project of "Hurt Village" as a potent allegory for urban neglect set against the backdrop of the Iraq war; Christopher Shinn's Dying City melds the personal and political in a theatrical crucible that cracks open our response to 9/11 and Abu Graib, and finally Dan LeFranc's The Big Meal, an inter-generational play spanning eighty years, is set in the mid-west in a generic restaurant and considers family legacy and how some of the smallest events in life turn out to be the most significant.

Six American playwrights whose work has gained critical recognition and acclaim in recent years and who have been produced at some of the key theatres for new plays in the U.S. Editor Sarah Benson is the artistic director of Soho Rep theatre in New York.