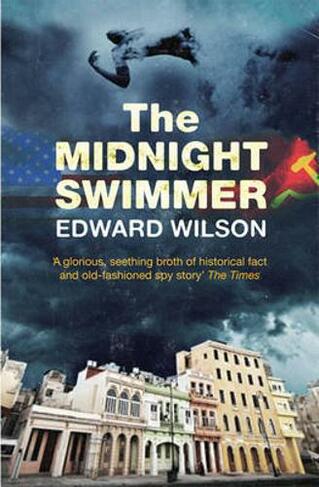 October, 1962. If the Cuban gamble goes wrong and war breaks out, Britain will no longer exist. London dispatches a secret envoy to defuse the confrontation. Spawned in the bleak poverty of an East Anglian fishing port, Catesby is a spy with a big anti-establishment chip on his shoulder. He loves his country, but despises the class who run it. Loathed by the Americans and trusted by the Russians, Catesby is sent to Havana and Washington to make clandestine contacts. London has authorised Catesby to offer Moscow a secret deal to break the Cuban Missile Crisis deadlock. But before that can happen, Catesby meets the Midnight Swimmer who has a chilling message for Washington. A triangle of love and death that began in Berlin ends in Cuba. On one corner is a war disabled KGB general, on another corner is his unfulfilled wife... This sophisticated novel is full of twists and turns that merge historical fact with fiction. Sleaze and high politics literally share the same beds. A white-knuckle superpower standoff is played out against a backdrop of honey trap blackmail, Mafia contracts, assassinations and Vatican scandal. The real blurs into the surreal as Che's car surfs on the Havana seafront and Fidel takes the pitcher's mound against a professional baseball team.

Edward Wilson is a native of Baltimore. He studied International Relations on a US Army scholarship and later served as a Special Forces officer in Vietnam. He received the Army Commendation Medal with 'V' for his part in rescuing wounded Vietnamese soldiers from a minefield. His other decorations include the Bronze Star and the Combat Infantryman's Badge. After leaving the Army, Wilson became an expatriate and gave up US nationality to become a British citizen. He has also lived and worked in Germany and France, and was a post-graduate student at Edinburgh University. He is the author of seven novels, A River in May, The Envoy, The Darkling Spy, The Midnight Swimmer, The Whitehall Mandarin, A Very British Ending and South Atlantic Requiem, all published by Arcadia Books. The author now lives in Suffolk where he taught English and Modern Languages for thirty years.