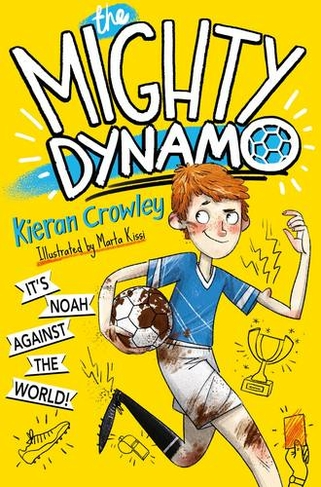 Cheer on Noah and his team in Kieran Crowley's The Mighty Dynamo. Filled with footy, fun and friendship, it's an hilarious story perfect for young football fans. Noah longs to be a professional footballer - and playing in the Schools' World Cup qualifiers might be just what he needs to get scouted. But when he's banned from his school team for something he didn't do, all his dreams are in doubt. Determined to live up to his Mighty Dynamo nickname, Noah must find his own way to enter the contest - no matter what it takes! With best friend Stevie on tactics, and the skills of some unlikely new teammates, he's soon ready to take on the world - just as long as no one plays foul . . .

Kieran Crowley is a children's writer from Mallow, Co. Cork. His debut novel, Colm & the Lazarus Key was nominated for the Bisto Book of the Year Award in 2010. The follow-up Colm & The Ghost's Revenge was published in 2012. His novel The Misfits Club was published in June 2017 by Macmillan Children's Books.Marta Kissi is a London based illustrator originally from Warsaw. Her favourite part of being an illustrator is bringing stories to life by designing charming characters and the wonderful worlds they live in. She shares a studio in London with her boyfriend and their pet plant Trevor.