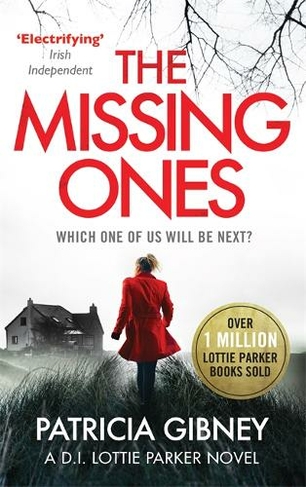 The Missing Ones: An absolutely gripping thriller with a jaw-dropping twist: (Detective Lottie Parker)

By Patricia Gibney (Author)
Paperback
https://www.whsmith.co.uk/products/the-missing-ones-an-absolutely-gripping-thriller-with-a-jawdropping-twist/patricia-gibney/paperback/9780751572179-12-000.html £7.37 rrp £8.99 Save £1.62 (18%)
GBP
Availability
In Stock
Free Delivery Available When You Spend £25 Or More
Details
Spend £25 on eligible products to receive free standard delivery to home or free next working day click and collect to store
Share

The hole they dug was not deep. A white flour bag encased the little body. Three small faces watched from the window, eyes black with terror. The child in the middle spoke without turning his head. 'I wonder which one of us will be next?' When a woman's body is discovered in a cathedral and hours later a young man is found hanging from a tree outside his home, Detective Lottie Parker is called in to lead the investigation. Both bodies have the same distinctive tattoo clumsily inscribed on their legs. It's clear the pair are connected, but how? The trail leads Lottie to St Angela's, a former children's home, with a dark connection to her own family history. Suddenly the case just got personal. As Lottie begins to link the current victims to unsolved murders decades old, two teenage boys go missing. She must close in on the killer before they strike again, but in doing so is she putting her own children in terrifying danger? Lottie is about to come face to face with a twisted soul who has a very warped idea of justice. Fans of Tess Gerritsen, Karin Slaughter and Helen Fields will be gripped by this page-turning serial killer thriller, guaranteed to keep you reading late into the night. What everyone is saying about The Missing Ones: 'Gripping . . . palpable tension from the very start to its electrifying twist' Irish Independent 'This debut novel from Gibney is just EVERYTHING!!! This was THE BEST book I have read in quite some time. If I could give it more than 5 stars, I would!' Butterfly's Booknerdia Blog 'Totally riveting and 100% engrossing.' Books From Dusk Till Dawn 'A gripping read from beginning to finish.' Deja Read 'AMAZING! Really well written and kept me itching to read the next page. It was unputdownable! Cannot wait to read book two when released.' Goodreads Reviewer 'I was immediately grabbed by the opening paragraph and was so enthralled that I read it in two sittings. I only put it down when my eyes refused to stay open!' Goodreads Reviewer 'It's one of those stories where you look at the clock and you think just a couple more chapters, and then you look again and hours have gone by. It was well worth the lack of sleep.' Goodreads Reviewer 'A phenomenal read for a debut novel - when I say good, I mean gooooooooood.' Page Turners Nook 'Gibney definitely is a writer to watch and an exciting new voice in crime fiction.'But Books are Better

Patricia Gibney is the million-copy bestselling author of the DI Lottie Parker series. She always yearned to be a writer but between her full-time work and raising a family she could never find the time or commitment to fulfil that ambition. However, tragedy was to intervene which caused a major shift in her life.In 2009, after her husband died following a short illness, Patricia had to retire from her job and found that writing helped her cope through her grief. She then started to write seriously. Fascinated by people and their quirky characteristics, she always carries a notebook to scribble down observations and ideas.Patricia lives in the Irish midlands with her children.www.patriciagibney.com