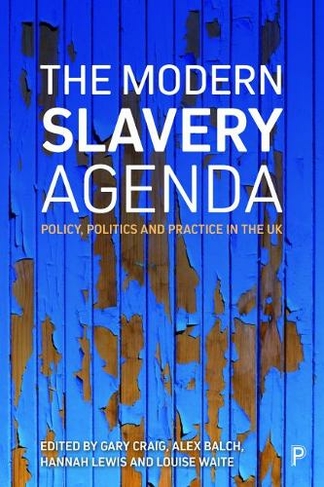 Modern slavery is growing despite the introduction of laws to try to stem it. This hugely topical book, by a team of high-profile activists and expert writers, is the first to critically assess the legislation, using evidence from across the field, and to offer strategies for improvement in policy and practice. It argues that the Modern Slavery Act is inadequate and punitive; and that the UK government is actually creating the conditions for slavery to be promoted. 8 Tables, black and white; 3 Illustrations, black and white

Gary Craig is a Visiting Professor at the Law School, University of Newcastle upon Tyne and at the University of York. He previously worked as a community development activist. He has researched and published widely in the fields of 'poverty, 'race' and ethnicity and modern slavery; He co-convenes the national network Modern Slavery Research Consortium. Alex Balch is Professor, Department of Politics, University of Liverpool. He is also Associate Head of School for Research and Impact and Co-Director, the Centre for the Study of International Slavery. He has researched and published widely on forced labour, migration, support for survivors and on the organizational systems in the UK such as the GLAA and Border Agency. Dr Hannah Lewis is Vice-Chancellor's Fellow, at the University of Sheffield. Her research interests include community and social relationships, migration and refugee studies; immigration and asylum policy; forced labour and 'modern slavery', faith and anti-trafficking; and the ethics and methodologies of research with migrant populations. Her work has been published in many journals and she has contributed to three books. Louise Waite is Professor of Human Geography at the University of Leeds, UK. Her research interests focus on discourses of 'modern slavery', unfree/forced labour and exploitative work among asylum seekers and refugees. She has published in a range of peer reviewed journals and in recent collaborative books